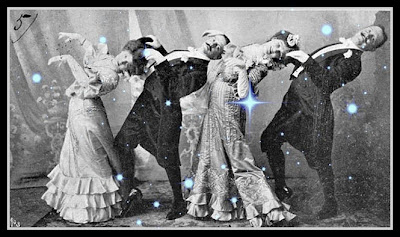 Hope y'all have a silly, sparkly, safe, wonderful New Year!
(hopefully 2014 will bring us all amazing times, prosperity, good health and happiness!)

Created by the warped mind of nitebyrd at 8:17 PM 4 blew out from under the bed

In the old days, it was not called the Holiday Season; the Christians called it 'Christmas' and went to church; the Jews called it 'Hanukkah' and went to synagogue; the atheists went to parties and drank.  People passing each other on the street would say 'Merry Christmas!' or 'Happy Hanukkah!'  or (to the atheists) 'Look out for the wall!'

~Dave Barry, "Christmas Shopping:  A Survivor's Guide"
Created by the warped mind of nitebyrd at 11:30 PM 3 blew out from under the bed Created by the warped mind of nitebyrd at 12:53 PM 4 blew out from under the bed

Bring some cheese, I've got the whine!

There are people who have money and people who are rich.
~  Coco Chanel

I’ve been struggling with my feelings and how to express them about an incident that happened with a friend since my return from North Carolina.  I know it is extremely difficult for some people to imagine the life of another if they have never had the same and/or similar experiences.  It can be like describing snow to a person that has never seen or felt it.  Because of the difficulties I’ve have gone through over the years, I try to explain my “snow” the best I can without having an avalanche of memories/pain/hurt come crashing down on me.  Perhaps that is my problem – I can’t paint a realistic verbal painting, I can only sketch in the abstract.

Before I meander down this tangent any longer, let me give y’all some background.  In 2008 when I decided to go to esthetician school, I applied for a Sallie Mae loan.  Since both my credit and Mulder’s sucked by then, Sallie Mae asked for a co-signer.  My sister turned me down.(My sister and brother-in-law are millionaires but live like paupers.) However, my friend of 20-plus years said she would be more than happy to co-sign the note.  My boss would be reimbursing me a portion of the tuition upon graduation, which I would use to pay part of the loan.  I did not envision bankruptcy at the time nor did I know that my attorney was not going to do his due diligence when filing my bankruptcy.  Sallie Mae loans cannot be included in bankruptcy unless they are an adult education loan, which mine was.  The attorney failed to note this and my loan became my co-signers responsibility when the bankruptcy was finalized.  Brilliant.  In January of 2010 when I discovered the error, I did everything possible to rectify the situation without success. The only solution was paying another $600.00 to get different attorney to fix it. (There is much more to the story but I won’t go into it, as it proved irrelevant.)  To keep everything simple until another solution could be found, my friend and I signed the paper to have the monthly payment deducted from my checking account.    I informed her of every thing I did to have the loan returned to me and I have never missed a payment.

My friend has never experienced financial hardship. She has often said how smart and lucky she is to have a husband that worked for the government. She also is very astute when it comes to finances which she also acknowledges that it's easy when you have money.  I'm not jealous of my friend because I know what it's like to not have to worry about money. How could I begrudge someone their life because mine isn't as their's? About a year ago, my friend began making suggestions about how to pay this loan off more quickly and other comments.  I should have been more perceptive and reacted accordingly. I did start to pay a bit extra each month but apparently not enough and/or my actions weren’t satisfactory.

Here is where your appreciation of abstract art is going to come in handy, my lovely readers.  I am not going to describe in minute detail my financial problems.  Suffice it to say, they are many.  They require much manipulation and creativity every damn month. There is going without, making do, making last, etc. etc. etc. I have days when the repercussions of what happened back in 2005 are too much for me to bear and I scream like a banshee driving home then go cry in the shower. I did not plan for a life like this at my age.   It is like an ever-present shadow in my life.  However, I will not let it destroy me – after all, it’s only money.  I still have a home, can buy food, have a job, am healthy, have good children and an adorable grandson among so many other things. I so, usually, consider myself “rich”. That way I can deal with the shadow most of the time.

Mulder and I planned the four-day trip to North Carolina approximately a year before we went.  It was never definite until we knew we had the funds to afford it.  That meant money that was not going to be used to pay the mortgage, food, loan, insurance, etc.  The money for the trip came from some overtime he made and the profits I made from selling on eBay and Etsy.  Our trip was made possible by hard work.  I don’t think I had to keep it a secret nor did I think I had to explain how we got the means to take a trip to anyone.  My obligations were/are taken care of.

The day we returned, there was a letter from my friend.  She had written to Sallie Mae about having the loan returned to me.  The response she received was the exact same response from the same person that I had received 3 years prior, a copy of which I had sent to my friend.  Since my bankruptcy had been discharged over three years, I had planned on writing to Sallie Mae to reapply for the loan but I guess I didn’t do it quickly enough for my friend.  I should have taken the comments and suggestions more to heart but I thought my friend was a friend as I am.  Apparently not.

Mulder and I have a small emergency savings account.  There was enough in it to pay off this loan.  We discussed it and did just that. The $3,300.00 was a tremendous amount to us – the “what ifs” are many but the fact that by paying this loan off took a huge stressor away from me is worth ten times that amount.  Hopefully, we will be able to replace the savings before we actually have an emergency. My feelings for this friend have been forever altered.  This is a person that has known me for a very long time.  We worked together for many years, we’ve been in a club together, we’ve spent weekends away.  We’ve laughed and cried, we’ve shared our lives. But I cannot look at her the same way any longer.   She will still be my friend but she won’t be my friend. Am I wrong?

I know she has money but I now know she will never be rich.

Created by the warped mind of nitebyrd at 8:53 PM 6 blew out from under the bed

Labels: friendship, It's not all about the money, loss of trust
Recentes Anteriores Home
Subscribe to: Posts (Atom)