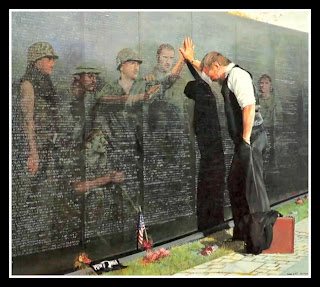 The patriot's blood is the seed of Freedom's tree.
~Thomas Campbell

Created by the warped mind of nitebyrd at 7:38 PM 6 blew out from under the bed

Labels: holiday, Remember those who gave all

Few things really piss me off. (All right, there are A LOT of things that really piss me off but I’m not writing War and Peace right now.)  If you want to see my head explode and hear my Exorcist voice, ask me, “What’s for dinner?”  Those three words make my blood boil.  Another thing that makes me furious is half-donut-eaters.

Y’all must know people like this.  They are either the largest person in the group or the skinniest bitch around.  From my experience, they are never average to slightly overweight people.  They are always the extremes.  And, their donut etiquette sucks.

Nothing is more pathetic than seeing a box of donuts that is riddled with halves.  Poor mangled (‘cause Gods forbid you use a knife!) glazed, sad filled ones oozing jelly or cream like a zombie ravaged head, wretched chocolate covered pieces, their ends drying out by the minute.  It’s disgusting and downright rude.

Grow a set people and eat the whole damn donut!  I know you can do it.  For the large/BBW or M/fat/fluffy/roly-poly/big, etc. folks, you’re not fooling anyone by only eating half a donut.  I know you can eat a whole one and probably have on more than one occasion. I DON’T CARE!  You obviously eat and do a damn good job of it.  Just because there are other people around won’t make you look thinner if you only eat part of a donut (or half your lunch salad with lemon, for that matter)!  If you’re on a diet, don’t eat any part of a donut!  By ripping it in half doesn’t mean the ratty part you left in the box kept the calories.  Jeez! 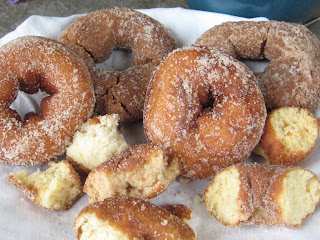 For all you waifs that are model thin and look like heroin addicts, I know you’re skinny.  Your adolescent boy-like figure is a perfect size -0.  Lots of men love women without tits.  I’m sure that a whole donut will fill you up for days and days.  I DON’T CARE, eat the whole damn donut!  If you are a full-grown woman that only weighs 99 pounds and you can’t eat a whole donut, get some medical and/or psychological help.  Worrying that the donut will make you gain a pound and whining to everyone, "How bloated!" you are will burn up those calories in no time. Bitches!

So now you’ve been warned.  I’m a slightly overweight, mildly psychotic, rage filled-woman that will throw out with abandon anymore donut halves I see (or I might stab you in the ear with the knife you didn't use).  I don’t care much for donuts myself but the wanton destruction of pastry is just too much for me to bear.  I won’t even get started on half-cookie-eaters.

Created by the warped mind of nitebyrd at 11:54 AM 9 blew out from under the bed