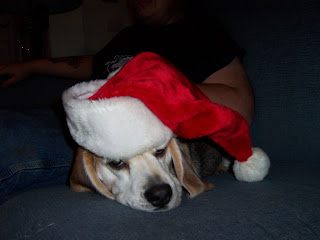 Tony was bought for my son (you’ll hear more about him in a moment) after his other dog, Lance, died. Tony, whose full name is Antonio Blue Bandaras, was named by the breeder and we kept it. When Tony was about a year old, he injured his back jumping off my son’s bed. Major spinal surgery followed. He’s been fine ever since, until this morning.
My usual morning routine is to get up, drink some coffee then walk the dogs. This morning, I went to get Tony out of my son’s room. He was on the bed and when I called him he climbed over my sleeping son and more or less slid off the bed. He staggered to me and sat down. He would not get up. Then he had a seizure.
Robert, my son, woke up at this point, I think because I started to scream. He picked Tony up and Tony seized again. I knew I wouldn’t be going to work; I’d be going to the vet. Robert put Tony down on one of the dog beds and he began to sway as he tried to lie down. He finally did lie down and there he stayed. I was very concerned that he had hurt his back again and there was no way we could afford that surgery again.
I called the vet and was told to go to the emergency vet clinic. I got Tony into the car and off we went. He was very wobbly and lethargic in the car. Once at the ER vet, I was told that all the vets were there doing rounds and they would all look at Tony. Three and a half hours later the head vet came out to say that the neurologist thought Tony might have a brain tumor or a spinal lesion. The dollar signs danced in my head. The ER vet suggested I take Tony to my regular vet for blood work, etc. to save some money. So, back Tony and I go in the car.
On I-95 my cell phone rings and it’s Robert wanting to know how things were going. I told him what the vet said and Robert wonders if perhaps the POT Tony ate at 3:30 in the morning might have something to do with his problem.
Had I not been half way to the vet and driving 80 mph on the interstate I would have turned the car around and gone to where my son works and beaten him with a bat. You all could have seen my mug shot on the news. Instead, I just looked at Tony and realized the dog didn’t have a brain tumor of spinal lesion; he was stoned out of his mind!
I really need a cigarette at this point but I can’t hold onto the dog and drive at the same time. I also needed a drink but that was out of the question. The reason I wanted nicotine and alcohol so badly was I had to carry a toasted beagle into the vet’s office and tell them he had eaten my son’s stash.
Now, I know that you’re all wondering what the hell kind of parent am I. I think I’m a good parent. I was honest with my children when they asked questions, I told them the dangers of drugs, alcohol and unsafe sex. They both managed to graduate high school and make it to adulthood but let me tell you – children do not listen to you. They just don’t. They think they are so fucking smart and you are so fucking stupid, they have to go out and try to prove it.
They will come back and tell you you were right AFTER they’ve screwed up. The satisfaction there is you can say, “I told you so.” Those are my four favorite words right after, “Here’s your chocolate cake.”
But, I digress. Just remember, your young children are so cute, enjoy them while they are little. They grow up.
Tony, whose new name is, Antonio “Cheech & Chong” Bandaras, will be fine. He’s been flushed with charcoal and fluids. He’s walking and eating lots of doggie treats. He does seem to want Twinkies, for some strange reason.
Robert, who works for his father, will not be getting paid for the next two weeks and is now forbidden to have any animal in his room. The remainder of his pot is now sealed in a coffee can and has been placed on the top shelf of the closet.
Created by the warped mind of nitebyrd at 2:12 PM

Sorry, I know you're not laughing at it all, but I am!

We once got a puppy drunk, not on purpose, someone left the drink on the floor and he lapped the vodka up, and was walking around in circles, kept falling over. He was fine in the end.

The very first time I got drunk, it was at a family party (my folks had lots of them back in those years). I was 14 and I stole a bottle of my dad's peach brandy. I shared it with my dog, Sam. It was a hot summer night. And it didn't take much...but the whole fifth was gone. I remember pouring SOME of it into Sam's bowl...we both woke up in the backyward, my family none the wiser...and Sam staggered around for two days...actually I may have, too...

That's the reason why we don't want animals.

Kids can be aggravating at times, to put it mildly... Not to mention expensive. Too bad they look so cute when they weigh 7 - 60 pounds... :)

I'm sure you don't find this funny, but it is quite funny to us reading it!!! ......After you've calmed down, beaten up your son, checked the dog's ok, had copious amounts of alohol, AND chocolate, and a suitable amount of time has passed, maybe, just maybe, you might find this funny too!!!!

I'm in on the funny part!! Got a good laugh out of me!! Glad to her Tony will be/is fine. We once got kittens stones on pot, we found out when stoned, they don't always land on their feet!! (over a bed, we weren't THAT mean)

Thanks everyone for stopping by. Actually, once I knew Tony would be okay, I found this very funny. The picture of Tony is his usual expression. Being stoned didn't change it much except he just looked somehow more "out of it." I'm very happy that I gave everyone a good laugh!

Nitebyrd, this is priceless! I was LMAO and then nodding empathetically at 'children do not listen to you. They just don’t. They think they are so fucking smart and you are so fucking stupid, they have to go out and try to prove it.'
Suddenly I dont feel alone as a parent any more!

Hmmmm yes, we are far too familiar with teenagers and the 'hidden' stash! When do they grow up? You did say they grew up didnt you?

Good Tuesday to you, Nitebyrd ! How is it going ?

If I dont get a chance to visit you again before I leave to Oz, I'd like to wish you a Merry Christmas! Hope you have a good one!.

Came by again on the 8th to say hello and see what was new with you, Nitebyrd. Hope that all is well --

You are the winner of this week's wordless Wednesday! Would you hurry up and write another post? I've read this one 3 times now!

Nitebyrd,
How are you doing ?

Came by to say hello, and see what was new, and to thank you for coming by so often to comment --