Zombies Have Rights, Too! 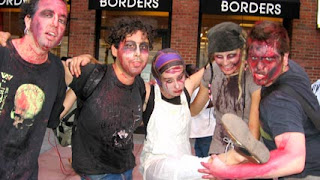 The Eighth U.S. Circuit Court of Appeals has upheld the rights of free speech and peaceable assembly -- all it took was seven zombies and a simulated weapon of mass destruction.

Last week, the City of Minneapolis agreed to pay $165,000 to the so-called Zombie Seven, settling a case that over four years came to address far more than zombie make-up.

In 2006, seven friends got together in downtown Minneapolis as the city celebrated a weeklong Aquatennial. They were dressed like zombies and carried a few duffel bags filled with speakers and a microphone in what was supposed to be a piece of social commentary on mindless consumerism -- part prank, part political statement and part lighthearted street theater.

Raphi Rechitsky was one of the participants.

"This was a zombie dance party that a few of my acquaintances put together," he told AOL News. "I thought I would join, have a fun time instead of going out to the bars on a Saturday, get involved in some satirical social commentary and have some fun in the process." Not long after the zombie gathering began, police came by and asked the zombie protesters to turn down their music and not lurch toward any of the other pedestrians on the sidewalks. The zombies agreed and the police left. The group thought it was settled.

They could not have been more wrong.

An hour later, the police returned. The seven weren't performing anymore; they were watching a drumline perform and had put their equipment away.

But police took them into the station, where a sergeant had a bomb specialist examine the bags. The specialist confirmed that the bags didn't have anything other than speakers and wires, but the group was arrested, booked and jailed for simulated weapons of mass destruction, a state offense punishable by up to 10 years' imprisonment

Jake Sternberg, another member of the group, said the charge was concocted later.

"They knew what we had, because two officers had come up an hour earlier and asked us to turn it down," Sternberg said. "The police were rifling through our bags looking for drugs. They asked us, 'You like to travel, huh? We're going to make sure you never get on a plane again.' They did it on purpose.

"On my record it says 'weapons of mass destruction' and because of that, I can't even get into Canada. Once it's in the computer, it never comes out," Sternberg added. "The (arrest record being expunged) will be added on as a follow-up attachment, but not everybody will read that. That's what I'm facing for the rest of my life."

Rechitsky said the police used it so the group would have to remain in custody.

"Ultimately we were never charged with anything. And this is a part of the traumatizing experience of having this charge over your head while you're in for the weekend without getting bailed out."

Sternberg, who had lost the lower part of his leg from a motorcycle accident, had his prosthetic limb taken way so he couldn't use it as a weapon.

The group sued the City of Minneapolis and 13 of its police officers, but the police were granted a summary judgment by the court.

"It took six months to address the request for summary judgment," Sternberg said. "The judge was saying that because we were wearing 'funny clothes' our behavior and conduct was not protected First Amendment conduct."

The group appealed, and the Eighth U.S. Circuit Court of Appeals overturned the lower court's ruling, prompting the City of Minneapolis to settle the case last week.

The city attorney's office was not available for comment.

Instead of feeling victorious, Rechitsky and Sternberg seem more relieved that it's just over. 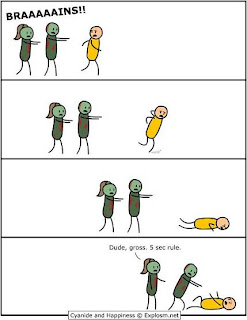 "We would have liked to get a formal apology from the city for the abuse we endured; however, what we wanted was to protect freedom of artistic, social and political expression for others in the future," Rechitsky said. "We already won that because of the appeals court decision, who rightly sided with us and the First Amendment.

"The city mentioned that it was in their interests to settle. And I certainly agree with that, because we could have taken this to trial and won, won a much larger settlement that would have cost the taxpayers much more money, but we didn't want to do that. We had already obtained a decision from the appeals court that protected freedom of political expression for others in this position."

Sternberg agreed, but he didn't think he would have changed anything if he faced the experience again.

Created by the warped mind of nitebyrd at 12:01 AM

So even though it was overturned these kids cant fly ever again?? How flipping stupid is that! Not to mention the stupidity of the whole ordeal.

The zombies should have just ate the cops brains... oh wait.. scratch that idea.

wow.. what a story. The stupidity of the cops and the power thing they sometimes have just pisses me off.

I have to agree with Jen... the whole power thing with some cops REALLY pisses me off. And this experience sounded exactly like a "power thing."

Hey, I just saw The Walking Dead clip you left for us on another persons blog on Friday. This show looks FANTASTIC!

Hope you're having a super Sunday, Sis!

wait.. what?
They made a live action series on the graphic novel?
AWESOME!

what are the odds we would blog about the same thing almost at the same time?

peedee ~ Whatever society lacks, it definitely doesn’t lack stupid. It abounds in every profession. Unfortunately many times it’s too prevalent in people that have no business being in the field they are in.

Blacknick ~ I guess they would have starved with these particular cops. Right?

Indi ~ Yes, it is a huge load of crap! The consequences for these kids is terrible and they did absolutely nothing wrong!

Jen ~ The screening process for the police may be lacking something. Although, idiots tend to slip through in every job.

Ron ~ My nephew is a cop in NY. Nine times out of 10, I will take the police’s side. In this case, I can’t. It’s ridiculous and yes, I think a “power trip” was obvious in this situation.

I’m very excited about the Walking Dead series. I just read that AMC ordered a second season even before the first aired!

ZomBee ~ Well, we ARE Zombies, aren’t we? LOL

the ~ LOL I'm a zombie. It's better than saying I'm depressed and living in the abyss, I think!

I've always resembled a zombie after too many drinks of red wine.

I could use a zombie to drink if you got one...

Quite bizarre but with such serious repercussions because of the mean mindedness of a couple of individuals in positions of authority.