An Arachnid With Attitude

I don't drink to excess. A passel of alcoholics in the family put me on the far side of caution. But every once in awhile, I do drink enough to get lightly toasted. Recently I discovered a hard cider that is just too scrumptious and a couple of Fridays ago, I overindulged. 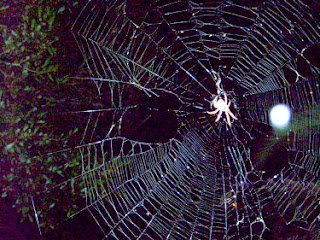 In my somewhat woozy state, I took my three dogs out about 1:00 AM for their evening bathroom break. While I was wandering with them, I almost became entangled in the absolutely most enormous spider web I'd ever seen! It had to be at least 7 feet across. Smack in the center was a big, fat spider who I just know was giving me a spidery stink-eye because she was going to be majorly pissed that I'd wrecked that killing/eating trap that she'd set up in my yard. The old saying that says that angels watch over drunks and fools was true that night because I did stop just short of being covered in sticky webbing. Even in that hard cider haze, that fucking web was eerily stunning there in the moonlight, swaying ever so slightly in the early morning breeze. I knew I wanted to take a picture of it but figured that it would be better with a bit more light 'cause my camera sucks at night shots.

Saturday morning, I was up early. I can't say I was bright. Anyone who has spent the night with me knows that I'm definitely NOT a morning person. I required mass quantities of caffeine and nicotine in order for my pathetic brain cells to start sparking. As I sat on the porch drinking coffee and smoking, I looked over to the spot where the web was last night thinking that now would be the time to capture it for posterity. And it wasn't there! I couldn't believe it! I went outside to the spot and NOTHING! Not a trace of web and not a hint of that mega-spider anywhere! I thoroughly inspected the nasty Bird of Paradise it was anchored to on the left and the pineapple palm it was attached to on the right … zip, nada, zilch … GONE! Okay, I thought, I burnt my toast last night and imaged the whole thing. I figured that hard cider was one of those alcoholic drinks that just messed with my head. As I'm wont to do, I forgot about the web and spider about 10 minutes later. 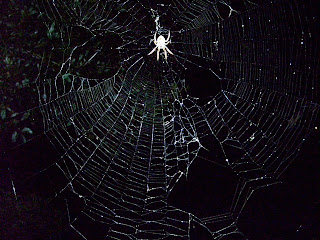 Saturday night, I venture out to the side yard with the dogs again. And, Bob's your uncle! Isn't that damn spider complete with the huge web back! The pictures you see here are proof that I wasn't having flashbacks to the '60's or hallucinations, it was REAL! Can you fucking believe the size of this web? And don't you know, Sunday morning it was gone again. Without a trace!


The spider is a nocturnal orb weaver. There are apparently many types of orb weavers. This particular one comes out at dark, spins the web to trap all the night bugs (and birds and small animals!) then packs up before dawn until the next evening. Cool, huh? Sunday night, me and Mulder actually caught the bitch weaving the web! Fascinating. She didn't think so I guess because she never came back. Pictures, dogs and nosy people didn't agree with her. Touchy bitch for a spider.

Created by the warped mind of nitebyrd at 4:08 PM

Wow, that was interesting! And I would have thought I was going crazy. Very cool pictures!

That would be very, very cool except that spider looks GINORMOUS and now I've got the heebeejeebies!

I never knew a spider could "pack it up" for the day and rebuild the next day!... you really do learn some interesting stuff reading these blogs!

Bring on the cider!

nitebyrd ~ I have had a fear of spiders from a very early age.. it still haunts me even now... but I won't kill them cuz they do good.. but they still scare the crap out of me... I mean 8 legs... shit they run so fast they should be in the olympics!!

As a spider-lover myself, I am fascinated with everything they do.. thanks for sharing the pics and your story! What a great experience!

Another cider-drinker! I just know that you and H. would get along like a house on fire! What was the wondrous high-octane brew you tanked up on?

My sister lives in the heart of cider-producing country in England so we're always spoiled for choice when we visit her and fill the car up when we leave.

Maybe she never came back because she loves an audience and wove that one as a gift for you.

brings out deep dark feelings for sure....

this is a great story!! I love the way you tell it, it just flows with humor and irony
plus we share the morning caffeine/nicotine habit - breakfast of champions!! ;)

I adore spiders and always try to protect them

Sounds like an orange garden spider... they weave a huge orb web that can be distinguished by a zigzag of silk (like a series of Z's) down the center. If you can get past the creepy appearance (and I can't), they're actually quite attractive... for a spider.

*going off to use a Raid Backyard Fogger as body spray....*

Ummm, tis spider season it seams. We've got tons of them coming out now. I don't like them AT ALL. My brother is FREAKED by them and screams like a little girl when he sees them. Much like I do when I see roaches.

Now to your tale. I laughed out loud girl. How freakin funny is that shit. I'd have thought I was crazy too!! o_0

And I'm a three cups of coffee while I'm waking up/getting ready kinda gal and as many butts as I can suck down before I leave for work. Then at work I do a ginormous RedBull. Then I get a shot of Cuban coffee aka:rocket fuel around 10am and another around 3pm.

oh, I forgot the 50 milligrams of Adderall I take a day too.

Bella ~ It was very cool. Especially when we caught her actually weaving the web. Creepy, but cool!

Anon ~ I wish she could come clean my house! That's one through spider! LOL

Distracted ~ She was probably the size of a silver dollar. If she'd been on me, I'd of FREAKED OUT! The "Huntsman" spiders in Australia are so big, they don't look real. They scared the shit out of me!

Jen ~ That cider is some good stuff. I really like Strongbow but it's a bit extravagant so Kelly's it is! I'm just hoping she wasn't sleeping in the house somewhere during the day!

Akelamalu ~ I think this one would have required a long shower and lots of scrubbing to remove!

Indi ~ Florida has the nastiest and weirdest bugs next to Oz, I think. We even have jumping spiders! The lizards scare me because those bastards move like the wind!

Kallan ~ Welcome! I'll have to post the picture my son got of another type of orb weaver - bigger and badder than this one. Hopefully he still has it on his phone.

FC ~ It's called "Kelly's" it's brewed in the States with Irish & English apples. Who knew Ireland had apples! and it has a wee bit of raspberry flavoring. It's yummy. When I go to Whole Foods, I'll always pick up some Scrumpy's Cider as a treat. Lucky you for having a sister that lives where they make cider!

Riff ~ Awww ... that's sweet! Better than thinking she was tying to snare me to eat!

Sir Thomas ~ I was so relieved that I wasn't delusional that I didn't even weigh the creepiness factor!

Heff ~ Okay. Never come to Florida or go to Australia! Spiders from Hell in both places! LOL

Dianne ~ Thank you! It's amazing that you can find something stunning in nature almost everyday. I've lived in FL for 34 years and never saw anything like this before! I try not to squish any bug except cockroaches and/or Palmetto bugs and will definitely murder fire ants. Most of the others (except mosquitoes) are helpful.

Mortuis ~ That's the spider my son got a picture of. He actually took a video when he touched the web and the spider went after him! She was even bigger than this spider. YIKES! Use the Raid that has a touch of outdoors fragrance, it's much nicer! ;)

Sunny ~ Holy Shit!, girl! You must be movin' like you're nitro powered! One Cuban coffee would do me in. Red Bull? That stuff tastes like ass. I'd rather be tired! Roaches skeeve me out, too. Mulder will scream like a little girl at the sight of them. Men!
Yes, I'll answer you! I forgot about Thanksgiving!

Definitely COOL! We have those webs and spiders in our yard now and then.
Neat photos!!

Hey, I can't view your site properly within Opera, I actually hope you look into fixing this.

Man, really want to know how can you be that smart, lol...great read, thanks.