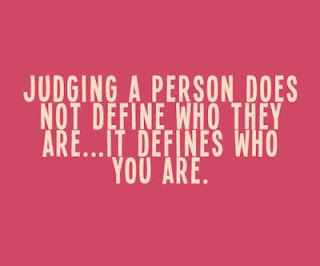 Does saying that you’re a good cook make you a good cook?  You can say it until you’re blue in the face but unless you can prove it, it isn’t a fact.  Am I right?

I’m thinkin’ the same logic would hold true for someone that say’s, “I’m a good Christian/Catholic/Baptist/Jew/Muslim/Buddhist/Atheist/Methodist/etc.”  You can talk about and/or write about your goodness and your devotion to your chosen Deity but unless you’ve proven it, why should I believe you?  In turn, if you have to point out your “goodness” to various and sundry, are you truly being good?

In my humble opinion, I believe if you have to say you’re good and/or feel the desire to list all your good deeds on a frequent basis, you might not be as benevolent and righteous as you might want me to believe.

Sam Bourne, the pseudonym of Jonathan Freedland wrote a book, “The Righteous Men”. It’s one of my Dollar Store finds and is an excellent read.  The premise is based on Jewish belief that there are 36 righteous men in the world and it’s the goodness of those men that keep the world from ending.  The men don’t have to be men of great devotion or belief.  They don’t even have to belong to The Birth and Resurrection Society – they don’t even have to believe in any God(s).  The 36 are truly good and will sacrifice, do something beneficial for others, right a wrong, etc. out of the goodness of their heart and they don’t expect recognition or profit in return.  The 36 are unknown, even to themselves.

I like this myth, story, belief, a lot.  I helps me to understand that even though our planet is batshit crazy right now, there might be, no matter how few, some truly good, decent people in the world. And the Goddess knows, they must be workin' their butts off!

Really, I need to have the belief that goodness and righteousness will prevail after reading about Bank of America, the I.R.S., how much our Prez’s vacation is going to cost us (and we won’t even get a t-shirt!) and the death by a thousand cuts that Paula Deen is facing.  She is a GOOD cook, that’s a fact! 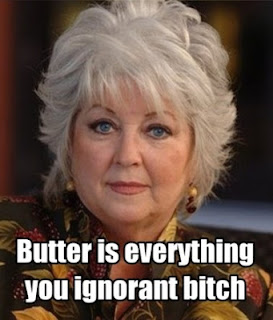 Please do not think that I’m going to defend Ms. Deen’s words or actions because I think using the “N-word” is appropriate.  It’s not and neither is using any other derogatory term for other races, nationalities or religions.  But, I do want to see someone of ANY race – white, brown, black, - that hasn’t used the “N-word” at least once in their life.  I’m also curious to know, if Ms. Deen had called one of her staff, “a faggot” or “a fat bitch/bastard”, would this kind of media-thrashing have gone on?  Paula made an error in judgment. She used words without thinking.  Yes, they were hurtful words, they stung but they didn’t kill. Human beings make mistakes.  I also think that African-Americans calling each other that word isn't right.  Mulder doesn't like to be called, "Wop" or "Guinea" by anyone, especially another person of Italian descent.

Is Paula Deen a truly good person? I dunno. She seems nice. She’s done amazing things for butter. Should she be persecuted on television, in writing and online for outdated notions or un-P.C. language?  No, she shouldn’t. Nor should anyone else unless somehow their words are intentionally spoken to hurt or defame. 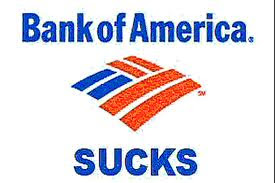 Those that want to throw “stones” at another that has made a mistake or even if it’s only a mistake because she got caught, look inside yourself. Go to your heart of hearts and determine if you can find a truly righteous person in there. Can you toss that stone without guilt?  If you can’t, then come join me in chucking some rocks at Bank of America or the I.R.S.  It’ll do your soul good, 'cause NO ONE is as rotten to the core as BofA! NO ONE!

Created by the warped mind of nitebyrd at 6:21 PM

6 blew out from under the bed:

I also think Paula Deen is being lynched... this is stupid... insane.

She apologized... and it seemed heart-felt. That isn't enough?

Jesse Jackson described New York City some years ago as 'Hymie Town' and I can't recall this much of an uproar.

Hell, Jackson has offered to even help 'rehab' Paula Deen.

This age of double standards is getting worse instead of better.

I certainly can't. In fact, I will be the first to say that I am as evil as they come. Why? Because I know evil when I see it.

For example..The Banking System, Our Government, and some celebrities are full of evil. Kim Kardashian sent out Fake Baby pics to her friends to see which one would land on the front of a tabloid magazine for money. She calls herself freind but she doesn't trust them. To me, that's evil. Brilliant...but evil.

Really good people don't have to tell others they are good because everyone already knows.

Just read this. My apologies for being so late. This whole shut down of Google Reader has thrown me for a loop. Hopefully I have my act together moving forward.

Sorry for the late reply, but I'm trying to get caught up in blogland.
I agree with you about Paula Deen. She seems nice and sincere. Who among us has not made mistakes with things we've said or done. Seems she helps a lot of people, being in business, owning restaurants, etc. Should she lose so much of that because of this crazy media frenzy... in my opinion, no.

It warms my heart to see I am not the only soul suffering from the loss of Google reader..
sheesh.
Ya know I just recently got supremely pissed at some one who told my daughter Not to use the word "Retard."
seriously?
It makes me so mad, that people get so bent out of shape by words. Has removing the word Nigger from our vocabulary gotten rid of racism? Has getting rid of words like faggot? or Wop? ~snort~ I sure don't see where it has worked. All it does is give rocks to assholes who want to find fault with other people and stand in righteous judgement. " I don't use that awful word, therefore I am a better person then them."
...right...
not.
I have a friend who works for the IRS, and he tells me it's like any other corporate America job, all the flotsam and jetsam rises to the top.
~laughing~
I have no stones to throw, but I will slap my but cheeks in their general direction..
~laughing~
just for you!
xxx
sorrow