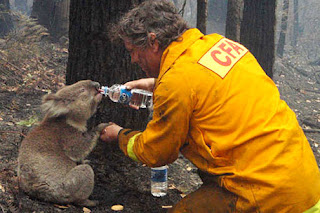 MELBOURNE, Australia (Feb. 12) - Authorities charged a man Friday with lighting one of the wildfires that killed a total of more than 180 people in Australia, and whisked him into protective custody to guard him from public fury.
Police said the suspect was charged with one count of arson causing death and intentionally lighting a wildfire near the town of Churchill that killed at least 21 people. It was one of hundreds of fires that raged through southeastern Victoria state Feb. 7, leaving 7,000 people homeless and razing entire towns.

The koala in the picture is going to be okay. She's at a rehab center healing from burns on her paws.

I haven't heard from Amelia in a couple days so I don't know if she got in touch with her friend that lived in Churchill but I'll let you know as soon as I hear.

Thanks everyone for your good thoughts, donations and prayers. When I was in Oz, everyone (and I mean EVERYONE) that I met, asked me about my feelings and/or did I know anyone who was lost at the World Trade Center in 2001. They then told me the horror and pain they felt about this horrible attack on the United States. This was 5 years afterwards! Five years, and Australians still felt emotional about something that happened half a world away. Now you can see why, Australia and her people are part of my heart.
Created by the warped mind of nitebyrd at 7:22 AM

13 blew out from under the bed:

My thoughts are with all...

The Koala I believe to be called Sam, the link below shows when firemen found her.

Glad he was arrested. I think his sentence should be old-fashioned and savage, an eye for an eye.

Please pass my own good wishes on, too.

Good JuJu for them!

I'm glad they caught one of them...who knows how many more are out there who lit the fires!

That photo of the koala is so heartbreaking.

Thank you for the update, Nitebyrd.

OMG...the photo of the koala bear brought tears to my eyes.

My thoughts and love are with all..

That is just so damn sad. My heart goes out to Australia as well.

It beggers belief that the idiots who started these fires can have been so irresponsible.

The ones a few years ago in Provence, France were found to be have been started by disgruntled firemen. Which is truly shocking.

Yes I can see and I agree they are a special group of people. Two of our dearest friends live over there and we miss them so much.

What has happened in Aus would have been tragic had the fires started naturally but to think that someone deliberately set them is just too terrible for words!

I hope justice is brought swiftly to the ones responsible for setting these fires.

What a beautiful photo of the koala. It breaks my heart to know so many lost their lives. I agree, I hope justice is brought swiftly as well.

hope you've heard from her since this post and that things are ok. crazy stuff, hey? isn't that something people asking about the world trade centre. wow, big hearts. how nice.