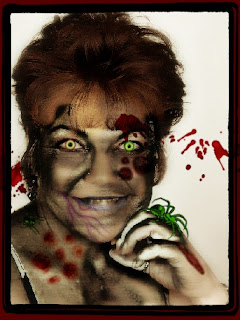 'Tis now the very witching time of night,
When churchyards yawn and hell itself breathes out
Contagion to this world.

Created by the warped mind of nitebyrd at 12:01 AM 4 blew out from under the bed Links to this post

On October 6, Mulder and I visited Universal Studios – Orlando for Halloween Horror Nights 22.This was the first time in many years that there was no theme for the event.  There were also no “No Scare Zones”. The streets were a free for all of vampires, witches, twisted trick-or-treaters, grim reapers, asylum escapees wielding chainsaws and ZOMBIES!!!  They’d pop up randomly or slither out of the dark and scare the crap out of me.  I loved it!

The main draw for me was,  AMC’s The Walking Dead – Dead Inside and Alice Cooper’s Nightmare. Both of the houses were excellent. Well, it is Universal, not the Kiwanis Haunted House in Chester’s barn, so I expected nothing less than exceptional.  Right?

Living 1.5 hours away from Orlando is one of the few perks of living in Florida. I’m not a huge fan of “The Mouse” but Universal, Islands of Adventure, Sea World, House of Blue and Hardrock Live, kick ass. Halloween Horror Nights is a highlight of my usually dismal year.  (Not attending last year was horrible!)Being an honorary zombie and having the third season of The Walking Dead coincide with HHN, made me damn near giddy to be going this year. (I have a very nice boss.)


There are seven “houses” this year ~

I only knew that Silent Hill was a video game and a movie but I hadn’t a clue what it was about.  A nice girl behind me in line filled me in.  The house wasn’t scary and I guess you had to be into the game and/or movie(s). The pyramid head guy was just stupid.  Since I’m around psycho nurses all day, those in the house were just more of the same.

Now, Universal wants to make sure that you get in the spirit of things by selling spirits of all types and alcohol content at about every 20 steps you take within the park.  By the time I got to Universal’s House of Horrors, I had enough “spirits” in me to do a seance with the original inventor of beer.  So, I’m just gonna say – Dracula, Frankenstein, The Mummy, Wolfman, still look great in black & white after all these years.  None of them could’ve scared me if they all came up and kissed me on the mouth.

Roasted turkey legs and popcorn abound, as do glow-in-the-dark and light-up hats, necklaces, bracelets, shirts – you name it, they have it lighting up and/or glowing.  You have to turn your light up stuff off when you go in the house or on a ride so it’s kind of annoying.  But you’ll have that skull necklace collecting dust for many years to come and that’s what counts!

I’ll give you a rundown of the rest of the houses and the Bill & Ted Show.  We missed the magic show (probably was buying beer!).  Basically, I’ll give you my impressions of the houses because you are kinda herded through like cattle and there is A LOT to take in while being accosted by the "scareactors".  My picture taking was erratic,  to say the least.  No photography is allowed in the houses. I did not go on any rides because I went on the Harry Potter ride in Islands of Adventure that morning.  My daughter lied and told me it really didn’t actually move . The bitch!.

Penn & Teller New(kd) Vegas ~ A 3-D walking experience, it’s silly and funny but only a wee bit scary. Very colorful! It’s good to go to this one in the middle of the others for a different experience,  I think.

Alice Cooper ~ Lot's of "jumpers" in this one. It was chaotic and fun, like Alice!

Dead End ~ A decaying mansion full of everything you'd expect in a haunted house.  When not being scared by "jumpers", seeing the attention to detail like dusty antimacassars and Victorian furniture, period dress, is impressive.

Gothic ~ Probably my favorite house after The Walking Dead.  A "Cathedral" setting with gargoyles - both on the ground and in the air! - candles, effective lighting and it was the biggest.  Our treat was seeing "the changing of the gargoyles" at the end of the house!

The Walking Dead ~ It gave me chills!  I actually touched the "Dead Inside" door!  Fantastic zombies and artifacts from the show.  Some crazy zombie killing was going on in Dale's camper.  The hospital, the department store, the barn and scads of "walkers".  Also, Teddy Bear Girl was "greeting" outside.  LOVED IT!

Bill & Ted's Excellent Halloween Adventure is a tradition at HHN.  While Bill & Ted are a bit dated, the show always skewers pop culture in hysterical fashion.  This year's show was no exception.  Seeing a show is also a nice break from the "scareactors" or jumpers, as I call them and it gives you a chance to catch your breath, while being able to drink your beer without spilling.

I don't work for Universal nor to I promote Florida tourism but if y'all ever plan a trip to The Sunshine State, come in October.  It's not as hell-hot as August, the Snow Birds haven't come back yet and you can visit Universal's Halloween Horror Nights!  (Make sure you spring for the "Fast Pass", it's well worth the extra money.)

PLEASE VISIT THE WONDERFUL BLOGGERS LISTED BELOW THAT ARE PARTICIPATING IN THIS YEAR'S "WALK", THANK YOU!

Created by the warped mind of nitebyrd at 12:00 AM 14 blew out from under the bed Links to this post

I'll be giving y'all my review of Halloween Horror Nights whilst still being on a The Walking Dead and American Horror Story high!

Created by the warped mind of nitebyrd at 8:05 PM 3 blew out from under the bed Links to this post

Zombies, Vampires and Chainsaws - OH! MY!

I'm outta here for some fun. And alcohol. See ya next week!

One of the good things about living in Florida.

(Adam struck out but it was a beautiful thing!)
Created by the warped mind of nitebyrd at 8:54 PM 9 blew out from under the bed Links to this post