Believe It Or Not - Bank of America is Satan

Since October 2009, I've been trying to get Bank of America to modify my mortgage. Back in 2005 something happened that altered my life forever. I won't bore you with details but let me say that it financially, emotionally and mentally ruined me. What was done may not have been logical/smart but it was done with the best intentions.
I'm not asking Bank of America to give me a “bail-out”, I'm asking that they delete their late fees, tack the past due amount owed to the end of the mortgage and let me continue to make payments that I'm now able to make. Being that I'm a white woman, a natural born citizen of the United States of America, don't have a disability and have been working non-stop since I'm 16 years old, I don't qualify for any of the government hand-outs that some people living in my country have the benefit of receiving. If that last statement offends you, FUCK OFF! I'm pissed and I really don't give a flying fuck about being politically correct. TANGENT ALERT! A school in Portland, Oregon is banning Halloween costumes because, among other reasons, “... cultural differences among our families that we must respect.” Wearing costumes and trick-or-treating is an inherently American tradition but this principal (he's not the only one) is telling us we have to be aware of cultural differences regarding American traditions for immigrants living in America. Are you fucking kidding me!?!
Back to Bank of America. My modification file that I have approximately 5” thick, there have been 6 different “Loan Modification Managers” handling my account. I've got a canned response letter from Barack Obama in response to a letter I wrote him about my issues and I've got some, “Bank of America - Rocks!” responses from the United States Department of Treasury, Office of the Comptroller of the Currency – helpwithmybank.gov. The latest manager handling my account is Stephanie Atkins Williams. She wrote me a letter, dated October 7, 2011 (this is the only correspondence I've received from Bank of America in months), kindly giving me her phone number to call her, “as soon as possible” to discuss my options. I called Stephanie Atkins Williams several times since receiving the letter only to get her voice mail that assured me after I left a message she'd get back to me in 24 hours. She never did.
Yesterday, I spoke to a homeowners insurance agent trying to lower the premium I pay through my mortgage escrow account. Not being sure that Bank of America would pay this due to the ongoing problems, the agent suggested I call them. I called Bank of America at their main customer service number. After giving my information, I was transferred to my “Account Manager”. Guess who answered the phone on the first ring? You got it, Stephanie Atkins Williams! I told Steph that while I had her on the phone, perhaps we could go over the letter she wrote me. Once again, I gave Stephanie Atkins Williams my info – account number, etc. This is the conversation that followed:
Stephanie Atkins Williams (SAW) ~ I'm sorry, I can't discuss your account with you.
nitebyrd ~ Why not? You sent me a letter to call you about my account.
SAW ~ We've assigned an Advocate to your account.
nitebyrd ~ Okay. Please transfer me to the advocate.
SAW ~ I'm sorry, I can't give you to the advocate.
nitebyrd ~ Well, give me their name and number and I'll call them direct.
SAW ~ I can't give you their name.
nitebyrd, (after a moment of mystified silence) ~ Let me get this straight. You wrote me a letter stating you are my Account Manager asking me to call you to discuss my account but now you can't talk to me about my account because Bank of America has assigned an Advocate to my account but you can't give me the name of the Advocate that is handling my account?
SAW ~ That's right.
nitebyrd ~ How am I supposed to find out who the Advocate is?
SAW ~ They should have contacted you.
nitebyrd ~ They haven't. Only you've contacted me.
SAW ~ I'm sorry, there's really nothing I can do.
My next call was to a lawyer.
Do you think this blog might incense Brian Moynihan, CEO of Bank of America, even more? Poor baby!

Created by the warped mind of nitebyrd at 11:04 AM 9 blew out from under the bed

Created by the warped mind of nitebyrd at 3:05 PM 5 blew out from under the bed

I may have to buy an iPhone and I got interviewed!

Random girl from ... IT'S ON RANDOM, interviewed me for her blog. Go over and show this zombie mama some love, 'K?

And now you can watch this ...

Created by the warped mind of nitebyrd at 6:43 PM 8 blew out from under the bed 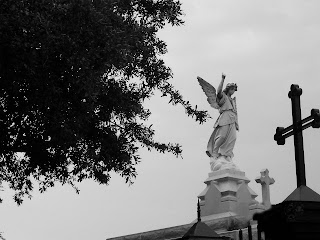 For death is no more than a turning of us over from time to eternity.
~William Penn
Susan, my co-worker who had a stroke last September, has died.

Please send some comforting thoughts this way, her family will need them.  Thank you.
Created by the warped mind of nitebyrd at 11:05 AM 9 blew out from under the bed

Thanks to everyone that participate in this last BOOBIE-THON.

Monday, October 10th, will be my 4 year blog anniversary!  I know I've only been half-assed blogging for the past couple of months but hope springs eternal that I'll get fired up soon and post the stuff that's been rattling around in my brain for awhile.

Since I won't be around much from Friday-Monday, I'm posting this today.  The reason I'll be busy this weekend is that a friend I haven't seen in over 20 years is coming down for a visit.  This is a very special friend that I've known since my middle-school days.  We've kept in touch on and off over the years but recently we connected on (ugh!) Facebook.  She sent me a letter that touched my withered heart deeply telling me that I was one of five people that changed her life.  I cannot fathom that I made a difference, a huge difference, in anyones life but she wrote it so it must be true.

Since it's October, my favorite time of year 'cause, you know - HALLOWEEN!  and because my birthday was last month (OMFG! I'm 58!!!!) I want to give someone a prize.  Leave a comment and when I get around to it, I'll use Random.org to pick a number and I'll send one of you a little something.  You know it'll be a bit weird because that's how I roll!

Created by the warped mind of nitebyrd at 9:34 AM 11 blew out from under the bed