more cat pictures
Created by the warped mind of nitebyrd at 8:06 AM 23 blew out from under the bed

Created by the warped mind of nitebyrd at 7:16 PM 28 blew out from under the bed

Bear with me folks as I reconstruct my beloved list. I'm really angry because I'm so fucking busy now that my application has been accepted and SLUMBER PARTIES by GAIL S. is actually a vendor/exhibitor at SWINGFEST 2008. I have approximately two weeks to pull this together and trust me, I'm crazed right now.

I'm now going to smoke and drink some coffee whilst fuming about the fucking ghost in the machine that tormented me with such rousing success! Fucker!

Created by the warped mind of nitebyrd at 8:10 AM 21 blew out from under the bed

What an airbrush can do! 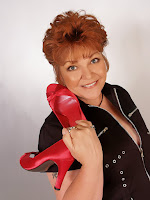 I needed a professional headshot for my Slumber Parties website. Damn! I look good! ;)

Created by the warped mind of nitebyrd at 12:48 PM 32 blew out from under the bed

I’ve been working on a story that is unusual for me. It doesn’t involve anything really funny so I guess that’s why I’m having a hard time with it. Anyway, I read Ashley & Me written by the very talented (apparently in MANY ways) Riff-Dog. Since I’ve got ARADD, his frequent mention of “rock bands” and my current concert withdrawal has got me drifting off into Rock Star Fantasyland. On top of that, Spiky has just blogged about a rock star. Right now with visions of Chad Kroeger, Ryan Peake, Myles Kennedy, Adam Gontier, and more, dancing, singing and fucking in my head, I’m surprised I can speak let alone type.

I never liked The Beatles. They never gave off that angst filled, bad boy quality I craved. The Rolling Stones did. They still do even if they are senior citizens. The Who did. Roger Daltrey can still get me wet. The Doors, now Jim Morrison couldn’t get any sexier, dirtier, moody, bad boy, if he tried. That man could give me an instant orgasm with the first note he sang. Of any song. Even the phone book, if he chose to sing that. I had a girl crush on Janis Joplin. She was a bad girl full of pain and rejection. She could sing the shit out of a song. I wanted to be Janis having sex with Jim Morrison and Roger Daltrey while Crosby, Stills & Nash played live in the bedroom. My only problem was I couldn’t sing and I had no means or money to become a “groupie.” My outlet was albums (remember THOSE!), TV, radio, and fantasy.

During the 1970’s and 1980’s, I was busy being a grown-up. During those times, rock & roll wasn’t really fashionable. My children grew up listening to “classic rock”. I loathe disco and “pop” music. I detest rap and hip-hop. Rhythm & Blues, I can take or leave. I won’t even discuss country. Mulder and I played our old stuff. Led Zeppelin, Cream, Jefferson Airplane, The Doors, The Who, etc. My kids still love that stuff. I do too, of course but as my kids grew up, Mulder made an unwise career change, I started menopause and lost my mind – a incredible thing happened, I discovered new rock & roll!

The voice that started my lust for young, hot, angst filled, new bad boys, was Chad Kroeger’s. He’s the lead singer for Nickelback. NO FUCKING NICKELBACK JOKES OR SNIDE REMARKS! I love them. Nickelback puts on a fantastic concert. I adore their music. I don’t care what the snotty, little-dick, critics say about them. Plus, Chad has fabulous eyes, a raspy voice that’s like ultra-fine sandpaper going over my skin and long, thin legs that go up to an adorable butt and meet at what’s purported to be the biggest cock in rock & roll. I’d give anything to see that cock. I wouldn’t even need to try it out, I just wanna see it!

Alter Bridge, the band that rose out of the ashes of Creed, is another favorite.

Mark Tremonti rips a guitar up. He’s possessed when he plays. I’d love to feel those hands on my body. Myles Kennedy can sing like an angel. I include Myles in my fantasies only as a bit-player. He’s beautiful but small and almost delicate. If he were a main player I might break him. That wouldn’t do. I guess it’s pretty twisted that a woman of my age has fantasies about men that are usually much younger than her and are rock & roll stars but I really don’t give a flying fuck what people think. It’s what gets me hot. I also love, what I perceive to be their mind set – “I don’t need to know your name, let’s party, let’s drink, let’s fuck, good-bye!”
Three Days Grace, Disturbed, Godsmack, Staind, Papa Roach, My Chemical Romance, Shinedown, Seether, Metallica (early), Finger Eleven, Hinder, Buckcherry, Breaking Benjamin, Type O Negative and more. They thrill me. They move me. They make me wet. I tremble with anticipation at concerts. Seeing them live, pouring out their hearts and minds, make me totally orgasmic. I go to concerts dressed totally age inappropriate. The music invades my body. I can feel my heart, lungs, stomach, and brain, vibrate to the pounding, pulsing bass, drums and guitar. I dance. I sing at the top of my lungs. I feel the dampness between my legs grow and the music goes on and on. It is the ONLY time I let myself lose total control. Being at a live concert of hard, heart-stopping, mind numbing rock & roll is where I can let everything go. It is a catharsis for me. 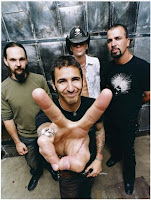 The fist time I went to a concert after embarking on my new life path, I was terribly self-conscious. I thought I would look like some desperate old tart trying to look young. To my amazement, not only was I not out of place but I was accepted and embraced by people young enough to be my children and others old enough to be my parents! We all felt the same. It was and is always an incredible experience for me. Whether it’s in a small club or a festival venue, I’ve encountered the same camaraderie between young, old, Goth, emo, straight, gay, high and sober – we all want THAT music. That pounding, pulsating, ear-splitting, blood boiling music. We want the release and freedom it gives us. The joy and tears. We all relate to the lyrics and the sound. Rock & roll unites us.

What works for me may not work for you. That’s okay. The boy-men of rock & roll lift my skirt. They blow me away. To say nothing of how I’d like to blow them! I’ve hung out like a teenybopper groupie after shows to meet some and have. No, I’ve never slept with one but that doesn’t mean that hope doesn’t spring eternal. I’m in fan-clubs and part of message boards. I know more than I should about current music and musicians. I rarely listen to the old stuff anymore. Why have raisins when you can have plump, juicy, sweet grapes? My “alone” time with my chosen vibrator is always populated with a rock star. He’s young, athletic, moody, talented, hung and he’s with me for as long as it takes to for me to get off. My fantasy life is most definitely full. My real-life? I’m workin’ on that.
*************************
I also would like to tell you about Daren Callow. Daren writes a blog and I was introduced to him by Giggle! Daren (Dazza) was offering free CD's of his music. Since the offer was FREE and for MUSIC, I couldn't not go for it! Daren isn't exactly hard rock & roll but his music is terrific. He obviously is a talented writer so it's no wonder his story "Lucky?" was published in "You're Not the Only One."
Since I only received Daren's CD a couple days ago and have only listened in the car one time through, I want to give Daren a good plug and not at the tail end of my exposing on my rock & roll obsession. Look for a longer review here, on MySpace and a couple Nickelback boards soon.
Thank you so much Daren. I love new music. I just may have to add you to my fantasy roster. I hope you won't mind.

Created by the warped mind of nitebyrd at 3:05 PM 28 blew out from under the bed