Eulogy for a Friend

I was going to tell you about my boss buying me tickets to the Nickelback concert for tomorrow night, but I came across this Friday and felt it was more important to share.
This is a eulogy written by a friend of Peter Steele’s. She was a real and true friend, not a acolyte, hanger-on, or supplier. She loved this man for the man he was, not because he was a Rock Star.
I don’t know this woman other than having read this on Facebook but she has kindly given me permission to share this with you.
I hope that we all have and can be this type of friend. 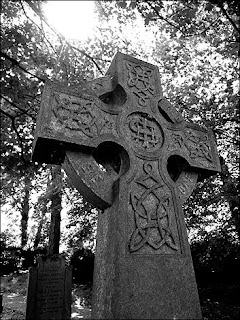 I met Pete Steele in 1997.
I was living and working in FL and had flown home for my birthday. Type O Negative was playing at The Roxy and I was a big fan; I went to the show. Being me, I sweet-talked my way in before the doors, and found Pete wandering around, fussing over his rig and the mix. I walked up to him, stuck out my hand and said, "Hi! My name is Ginger and I flew 1500 miles to see you!"
He took my hand in his two, smiled, then said, "What did you just say?"
I repeated myself. He continued to hold my hand in his. "1500 HUNDRED miles? Oh you are DEFINITELY getting a backstage pass for that!"
There were no passes left so he took me around to each security guard, introducing me as his sister and instructing them to treat me well or else. As he walked me backstage, I said, "You know, we sort of do look alike....." He said, "I didn't miss that."
He treated me like a treasured visiting relative that night, insisting that I hang with him and "the hippies" as he liked to call his bandmates, keeping me near him as they were made up in latex death masks, and while he did an interview with Carrie from WAAF.
We sat and talked about our families and the Three Stooges. We talked about everything BUT Type O Negative.
After the show, he and the band couldn't get the latex off (the makeup artist had left) so I made a stop at a drugstore for baby oil and nail polish remover. Got all 4 cleaned up and I was lauded as a saviour.
I spent the night hanging with the band at the old Suisse Chalet in Quincy, mostly chatting with Pete. He told me all sorts of things about his life, his family, and he asked me a lot of questions about MY life, my work, my favorite music. Again, we talked about everything BUT TON.
When I left that morning, he and the band all hugged me, thanked me again for helping get the goo off, and Pete asked for my phone number. I sort of gave him The Look...."Do I LOOK like a groupie?"
He was horrified.
"NOOOOOOOOOOO, I just really enjoyed talking to you and I'd like to do it again, if that's ok with you! Please?"
A few weeks later, he actually called me, surprising me.
That was the beginning of a 5 year relationship, mostly conducted via telephone, sometimes in person when TON was on tour (my name was always on the guest list, even when he was "entertaining" as I called his groupie groping) or I'd take a ride into Brooklyn and we'd hang out, go to dinner and walk around so he could show me his town. A few times, I was referenced in the fan blogs, usually as "some slut hanging all over him." It bothered him and he wanted to slap it down, but I told him to relax, no big deal. He had a girlfriend or 20, and I had a boyfriend here and a boyfriend there.
Sometimes he'd call my mother's house and chat with her- his own mom was not well, and he'd ask my mom for tips on dealing with her diabetes. He was the only male, and not married, so it was his job to take care of things. My mom called him "that dear little boy." I'd say, "Mom, that dear little boy is 6'5", 260 and has fangs...." She didn't care. She adored him and was miffed when I told her there was no and never would be any romance between us. I am a monogamous person, and he was a rock star.... the two don't work together.
I got to hear the album "World Coming Down" being mixed via telephone held up in Brooklyn Two Studio. He wrote a piece about meeting me and tucked it into an unreleased track on the album The Worst of Type O Negative. I still smile when I hear it.
He went from girlfriend to girlfriend because he always screwed it up- tortured artist, indeed. But still, we'd call each other and talk about stuff, just stuff, for hours and hours. Sometimes, when he had a new lady, he'd go days or weeks without calling, but he eventually he would and we'd catch up. There were times when months passed without hearing from him and I'd read about a new tour, a new project.
The last time I spoke to him was a few weeks after I'd met my Matty. Pete had already had a heart attack brought on by his years of drug abused (cocaine and steroids), his mom had passed away on him, and he was sad. We talked for a while and I told him about Matt.
"He sounds like a great guy. You deserve someone like that. You're a fine woman."
When we hung up he indicated that if I'd like, he'd love for me to call back. I didn't. His world and mine were moving on. He didn't call me again, and I always hoped that I'd read somewhere about him getting married and having kids.
Instead, today, as I left work, my best friend called me to tell me that he'd died.

Little known things about him-
He was a perfect vocal mimic and could accurately impersonate anyone after hearing them speak.
He was a roaring goofball and adored wordplay in conversation.
His speaking voice was at least 2 octaves higher than his singing voice.
He despised getting the fang implants but was too....scared? Lazy? Indiffent? to have them removed.
He was a blond. He dyed his hair regularly and for a while, we used the same shade.
He was blind as midnight- he wore super contact lenses and couldn't see without them.
His real last name was Ratajczuk- he was not Russian and he was not related to Josef Stalin- his father was a Polish dock worker and his mom was Icelandic. He also had 5 older sisters, no brothers.
He spoke at least 8 languages, all Slavic based.
He thought females were magical, so he treated them all with amazing respect. Or fear. Or both.
He hated being a "rock star" but loved music- I hope someday, someone releases the hundreds of pieces that he wrote and never released.
He was a hypocrite, a misogynist, a lapsed Catholic, a loudmouth, a whiner, a slob when he ate, a bitch when he was tired and a long term cocaine addict, but I loved him dearly and I will miss the son of a bitch.

Petey, I hope you finally found whatever it was that you needed so badly.

Love, Ging
Created by the warped mind of nitebyrd at 5:54 PM

Thank you so much for sharing this, Nitebyrd.

What a beautiful testiment to friendship!

And as I was reading this, I'm thinking to myself, "Who say's men and women can't just be friends?"

And GOOD friends, at that.

It didn't register who Peter Steele was until I saw his photo in your post below. Yes, I do remember him now.

Thanks again for sharing, Sis!

P.S. Have a great time at the Nickelback concert tomorrow night!

I dunno that cat and never heard of the band but the sentiment is perfectly stated and beautifully written.

honest, and loving, that's what all friends should be.
This was wonderful..
Thanks sweetie!

Every one needs a friend like that. To know that in this huge world, someone knew you that well, knew the good and bad about you, and loved you unconditionally anyway.

Thank you for sharing these beautiful words.

What a lovely eulogy. It sounds like he will be missed by her.

Amazing. How a chance meeting between two very different people can strike up a long time relationship. He sounded like a very nice man .. who through no fault of his own got into drugs for whatever reason society caused.. we all do things we shouldn't I guess. A touchin eulogy
;)

thansk for sharing the words and the music.