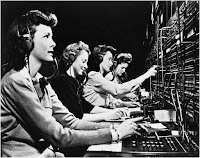 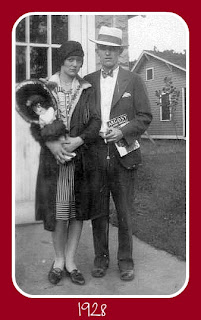 There are also no memories of my mother cooking anything wonderful. No family recipes passed down or some special tradition that I could pass along to my children. There are no pictures of me, my mother, my sister, her husband, my nephews, my niece or any relatives around the dinner table or at the Christmas tree. Although my aunts and many of my cousins were much older than me and my nephew, several were around our ages. Never saw them at holidays nor saw them much at all. I have memories of of getting gifts and seeing Santa at the department stores. Memories of me and my oldest nephew at the tree. But no memories of any “family” celebrations. Odd and rather sad, don't you think?
What I'm telling you here are my memories, they are the truth as I see it. I'm going to continue on with posts like this because I'm hoping that by digging into my past, I'll improve my present and future.
Created by the warped mind of nitebyrd at 11:41 AM

A switchboard operator - how I remember when they use to have those!!

Thank you so much for sharing this post, Sis. I really enjoyed hearing about your family history and background. Isn't is something how digging into your family past brings up a lot of things. It's the same for me.

Great photos too! I look forward to reading more.

The 'lost leg' story made me chuckle because I can imagine doing something like that myself when inebriated! LOL

It's amazing what 'comes out' when remembering people and times, it's good for the soul I think.

Thanks for sharing. x

Sounded like your mother really wanted a carefree life. Not saying anything bad...just a possible insight. I'm sure she loved her children. Loved the legless story.

Well, it's no wonder the woman drank tequila. ;)
I enjoyed the lost leg story because my dad used to do something like that. Can't quite remember just now what exactly it was, but your mention stirred a memory.
Isn't it cool though that you did have neighbors to share the holidays with and that your children have good memories. Alot of times it is the friends and neighbors who can be nicer than actual family. I think we've all got a few pot holes to deal with while going down memory lane.

Love how you tell a story and share your truths.

I LOVE this!!! Your Mom and my Dad were just about the same age...

We aren't aware of it at the time, but we have created great memories for our kids by just living our lives, and of course, being there for them.

I started on my family tree a few months ago, and I am amazed at what all I am finding!

I look forward to readying your future stories of your experiences!!

This is a great memory. I have a few of these, although mine tend to be quite a bit more painful...but you have given me incentive to write them down somewhere....

That was so interesting to read. I'm glad you shared it with us. Thanks.

Thanks for sharing a lovely story.
Woof xx

Awesome! It is so funny that you posted this, I'm working on some things like this right now...and BTW, you get a round about shout out today @ rednecklatte!!

I adore this story. I love delving into someone's past and the photos are stunning.

You may not have warm family memories of your own but you can make your own with your family.

my Mom was an operator with NY Tel also
how funny

I think it's good to visit the past to, as you say, improve the present
just don't get mucked up in it, I have made that mistake

I loved this story. Thank you for revealing so much and sharing about your family. The pictures are priceless. xxxoo

Wow. My first visit here and what a post!!

I'm coming back. Again and Again.

I have to say this is my favourite post of yours! I loved it! I love hearing about your history, your mother, you digging to discover more. Encore encore!

I often think the same - My memories are so far away from others that it's scary... but I figure if that's your truth then you should go with it. Great post.

Wow! What a story. I was hooked! Thank you for sharing it with me!

I really enjoyed reading this. It was interesting to look into your past and go down memory lane with you. :)

and those pics are extraordinary...

I found this very interesting. It is good for you to keep "searching" I think. I heard a saying (can't remember from where) the went something like this:
If you don't know where you came from, how will you know where you are going.
That is sad that you have no family pictures to look at or remembrances. So opposite of my youth, as I have TONS and tons of wonderful, treasured memories and photos.
I have tried to keep that alive with my own children.
I certainly would not judge your mom (or family) as I did not walk in her shoes.
Wouldn't it be neat if you could just sit and talk to her and ask all these questions?

good to be visiting you again

I have never lost a leg to tequila before, but I have lost the ability to walk on occasion. Your mom sounds like she was a riot when she was younger.