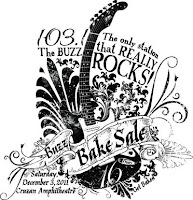 Last Saturday, I attended The Buzz Bake Sale. The Bake Sale has been the premier festival concert event in South Florida for the past 16 years. It was something I looked forward to each year. 103.1 The Buzz was the only rock station in my area. The concert was out of control! Seether, Chevelle, Hinder, Everlast, Adelita's Way, Art of Dying, Middle Class Rut, Falling in Reverse, One and for the canceled due to illness Staind, AWOLNation. From 12 noon to 11:00 pm, my son's girlfriend and I rocked our asses off. We drank beer, ate arepas, talked to the very attractive band, Art of Dying, said “Hi!” to favorite DJ's, and just generally had a great time. The Buzz Bake Sale was exactly that, for 16 years – ROCK & ROLL & MAD, CRAZY FUN. Damn, it was good!

On Monday, December 5, I got in my car after work, the radio was tuned to 103.1 as usual. Instead of hearing Disturbed or Korn, my ears are assaulted by Party Rock Anthem by LMFAO and then something by Taylor Swift. And then (somebody kill me!) Lady GaGa! I was confused, angry, reeling! When the station announcement came on it said the station was NOW 103! Seriously, WHAT. THE. FUCK!!!! On Monday, December 5, 2011 at 3:00 pm, CBS Radio killed The Buzz. The Palm Beach Post has an article if you'd like to read it.

I was bereft. I had trouble sleeping that night, waking up at random times feeling great anger but also a sense of tremendous loss. My son, ever sensitive, thought teasing me about my reaction and the always compassionate Mulder, telling me to, “Rub some dirt on it and get over it.” Would be the perfect way to snap me out of the red funk I was in. Yeah, those things always work.

Tuesday wasn't much better. Can I just tell you that the anger/rage of a financially ruined, post-menopausal, white woman is EPIC! It also is repressed, under pressure like a seemingly dormant volcano. On Wednesday, Mt. Nitebyrd erupted.

A patient at work pissed me off because of his pompous, ass-hat attitude and I lost it. Because of the irrationality of this, “college educated, senior citizen”, demands, my anger bubbled right up to the edge and then spilled over. I don't get ass-ripping rude with patients often but this person was so totally out of line that I went up one side of him and down the other. Gods! It felt good! It was a totally shitty week and because of a total dick, I finally got to release some of my pent-up aggression. I still felt anger and sadness but it was a bit less.

Thursday, I wasn't really feeling much hope for the week getting any better. So, you can imagine my surprise when I checked my email and found out that I won, YES! WON! the InThe Powder Room's give-away of an original Alex Roberts artwork! I don't win a whole lot, I'm not lucky. If I was, I wouldn't be broke and have horrendous anger issues, am I right? This really perked me up. I think between the anger and happiness, a little brain bubble exploded and I started to self-analyze. Yeah, I know, incredibly dangerous!

Driving home on Thursday, I realized that Monday, December 5, 2011, the day The Buzz was ripped off the air, was also the same day my father died. It was also his birthday. He would have been 111 years old. Now, I know that you're saying the death of a parent and the loss of a radio station cannot be the same. Apples to oranges and all that. Yes, you're right. But my father has been dead 51 years, even though there is sadness and pain, it has lessened greatly over the years. It will never go away. I was a child when he died, the sadness, anger and the question, “Why my daddy?”, was profound.

I think that the strength of the emotion caused by the radio station being taken away was mixed-up with the deep loss I still carry over the death of my father and that the day, his date of death/birthday and that I once again lost something I cared about and had no control over losing, was why I was so irrationally upset. Understanding that allowed me to let the inner volcano to settle down. For awhile.

(One of my favorite blogger, A Daft Scots Lass, has a picture of me at the concert up on her site.  I won her photo caption contest awhile ago.  She sent me her temporary tattoos and I wore it to The Bake Sale.)

Created by the warped mind of nitebyrd at 10:09 AM

2 blew out from under the bed:

My dad died only a little over a year ago, I'm sure 50 years from now, it will be just as painful.

And, in my book, you're always a winner.

I hit your site every day.

Paul/UP ~ Thank you. Idiotic as it seems, the swift and sudden departure of the station, upset me terribly. Well, I'm pretty much over it because I can't change it, unfortunately. Thank the Gods for iPods!

The pain of loss is different, no longer sharp but deeply dull. Hope that makes sense.