It's Scary Down Here! 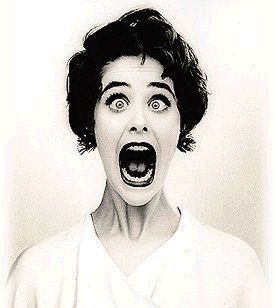 Aside from having crazed face eating folks, serial killers and 93 year-olds that still have driver’s licenses and cars, Florida has some damn freaky insects and reptiles. I’ve lived down here in Hell’s foyer for 37 years.   I was born in New York. The only bugs that I remember scaring the crap out of me up there were praying mantis. In Florida, every time I turn around, there’s some new invasive species popping-up that could headline their own horror film.

The walking catfish for example, while not an insect or reptile; it can rise out of the water and WALK, people! – fish-walk on land to get to its next watery home!  No self-respecting northern fish leaves its lake to walk around looking for a better location. They know that trotting around someone’s driveway at 7:00 am will produce screams that George Romero would get hard for and being beaten to death with a souvenir Mets baseball bat is shameful.


Florida has Palmetto bugs, which are really just humongous flying cockroaches but it’s easier to screech, “There’s a Palmetto bug in the shower – KILL IT NOW!”, then “TheresahumongousflyingcockroachintheshowerKILLITNOW!”  In addition, it’s more polite to point out to your dinner host that a Palmetto bug has fallen in your drink than a cockroach.

Snakes are also prevalent in Florida. Some are poisonous like the Coral Snake.  Just to have fun with us, Mother Nature also made the King Snake – it’s not poisonous but has the same colors as the Coral Snake but in a different pattern!  How ‘bout THAT!  Here’s the little poem you’re supposed to remember if you encounter a red, yellow and black snake –

That’s exactly what I’m gonna be doing in front of a snake, reciting poetry!  Black racers are almost as plentiful as our state bird, the mosquito.  They are harmless but still will cause me to totally loose my shit especially when I find one curled up in the dining room.  Or hanging out of the tree near my front door sticking its nasty tongue out at me. 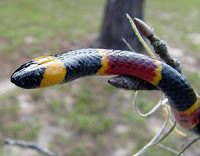 Lizards – anoles and geckos are common sights down here in the tropics.  They’re small, cute and you get used to them fairly quickly.  I’m not partial to them in the kitchen or bedroom, though.  I’m worried I might accidently cook one in the pasta sauce or one might crawl in my ear while I’m asleep.


So far, neither has happened but I still need to be vigilant. I’ve also gotten used to the mutant grasshoppers that look like they’ve taken steroids since birth and the dragonflies that are as big as Lear Jets. 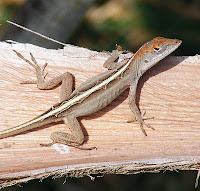 What I haven’t gotten used to are the curly tail lizards.  These guys are HUGE!  As in baby Godzilla huge.  They are also not as timid as the little lizards.  Well, they will eat the little lizards, so there’s that. The curly tails will stand their ground when you walk by or they’ll dart out of a bush narrowly missing your foot.  They also look at you with those beady lizard eyes, seemingly thinking how you’d taste for dinner.  This guy was sunning himself on the sidewalk outside my office recently.  My taking his picture didn’t faze him in the least.  Their tails curl up when they run or slink around on their bellies looking for someone else to terrorize. 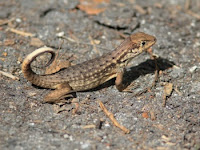 I grew up in Westchester County in New York. My playgrounds were fields, woods, creeks and orchards; I never saw one snake in all those years. You can imagine my shock at seeing one making himself all cozy-like in my house! Fourteen years ago, I moved from Southern to sort of East Central Florida. Even for all the weird, wicked wildlife in my area, I’m grateful that so far we’ve avoided the iguana and giant African snail invasions.  Although, I heard that the curly tail lizards migrated from the south and we are now poised on the edge of a hostile takeover by ginormous aggressive mosquitoes so if you hear blood curdling screams coming from The Sunshine State, know that I’ve just encountered either an iguana, slipped in giant African snail slime or been skewered by a mutant mosquito. 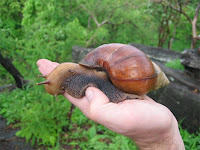 Created by the warped mind of nitebyrd at 9:36 AM

"In Florida, every time I turn around, there’s some new invasive species popping-up that could headline their own horror film."

OMG...THANK YOU!!! And that's one of the things I DO NOT miss about living in Florida...the bugs, snakes, fire ants, and other creepy things.

However, the geckos I never really minded. I actually think they're cute. But god forbid one ever got into my apartment because my cats used to play tennis with it; hitting it back and forth on the floor with their paws.

OMG...that video of the walking fish is creepy. I can't believe a fish could stay out of the water that long.

Those were my LEAST favorite. But I discovered that they have them here in the northeast as well. But, only during the summer months.

Have a great weekend, Sis!

UGH~
creep factor..
my folks live in FL, and other than the GIANT gators that like to lay on the driveway...
I have not seen anything else that slithers crawls and or grosses me out.
and then.. the 93 year old drivers..
this is me screaming!
lol

We call them roaches... :oD

And those damn Burmese Pythons that those idiots have freed down in the Everglades... that's one big WTF!!!!

Other than that, have a great day!!

CRAP!! Is Florida fenced in and electrified? Please say it is.
Wondering if "Jurassic Park" was filmed there.

And I was complaining about some of the creepy little bugs and things living under leaves in the corners of our yard. It sounds like I would be freaking out DAILY if I lived in Florida. lol State bird, mosquito... haha! I think we might be running a close second. ;)
What a strange fish. Catfish are weird enough, but that they walk too. Wow!

WTF I'm so glad I don't live there!

I never ask a snake for a passport, I immediately start whacking it with a shovel.

It was on my property illegally anyway!