Fear and loathing by this Virgo 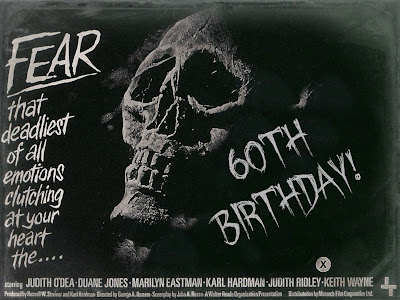 I’m pretty sure that everybody has had an episode in their early life that has affected them in a way that will endure until they pass onto the next world.

Some have had positive experiences that they will gladly tell you about in reverent tones.  Others have had something horrible happen to them and they won’t discuss it with anyone.  Then there are those who’s life-altering experience is terrible, they won’t talk about it until the time comes when they can no longer remain silent.  When these poor folks tell you what they’ve been living with for years upon years, your reaction is, “Holy Crap! You’re goofier than a box of rocks!”

My dear readers, I fall into that third category.  Since you already know, because I’ve repeatedly told you, I’m a few flowers short of a bouquet; you’ll refrain from the “box of rocks” comments.

On December 5, 1960, my father died.  It was his 60th birthday.  He. Died. On. His. BIRTHDAY!  I’m sure it was a miserable, horrible surprise (a massive heart attack at work) for him but it left an indelible mark on me, his daughter.  For 53 years, I’ve lived with the absolute terror of my 60th birthday.  I know that my fear is irrational.  My fear of clowns is also irrational but it’s there and no matter what I tell myself, clowns still make me pee my knickers a little every time I see one.

For a long time, it was just a vague thought that would swirl around in my brain.  I wasn’t too worried because I was only 19, 27, 34, 47, but now that my 60th birthday is smack dab in front of me, I am crazier than usual.  My family and friends are constantly “pooh-poohing” me when I bring it up (which is daily since January) but I think they are secretly scared shitless. The lunacy of an already on-the-edge-post-menopausal-white-woman could be epic.  I’ve requested no cards, no gifts, no cake, and no mention of my birthday at all.  I’ve told them this isn’t a ploy – PLEASE, do not do one thing to mark the occasion.  I am, excuse the pun, deadly serious. I’ve made an attempt to get all my ducks in a row, just in case, but per usual there are a bunch of stragglers wandering hither and yon.  I guess I shouldn’t worry too much about them ‘cause should the worst happen, I’ll be far from caring.

So, there you have it.  My deepest, totally wacko, life-changing event.  You can now feel relieved that you aren’t the most insane person you know.  Hopefully, I’ve made you happier about your own irrational fear.  I’ll be awake from 11:59 pm September 21 through 12:01 am September 23.  Why tempt fate?  If you see me online, please just say, “Hi!” ... Birthday wishes will not be accepted.

Created by the warped mind of nitebyrd at 8:28 PM

7 blew out from under the bed:

"I know that my fear is irrational."

No, it's irrational at all, Nitebyrd, because I had the EXACT same fear on my 40th birthday because my biological mother died at 40. Not ON her birthday, but close to it.

For years and years, I had this thought and belief that I would get same kind of cancer and die sometime during my 40th year. I kind you not.

So I KNOW you will still be hear on your birthday, but I PROMISE not to mention it :)

I wish there was something easier I can say here...this is such a hard topic.

Dr. Kubbler-Ross wrote this book called "On Death and Dying". It has bee a while since I have read it and I really need to re-read it again.

Basically, it outlines that there are 5 stages of death. The last stage being acceptance. I am trying to get to that stage now, so that I may live.

See? For all your worry about what may happen on your 60th, there is nothing you can do to prevent death to come to you. None of us has that ability. But what you are preventing is living. And I really do not wish that for you.

OK...so you will allow yourself to be paralyzed on this day. Go with the knowledge that this Joker will celebrate your existence. And give thanks that you have been around all this time..at the very least to create this blog, which has been insightful to me through the years. This may be a small accomplishment to some, but it is huge to me.

I do not give fear my time. I calmly ask fear if it wants to come with me on my journey. I embrace every second I have...and try to laugh through it all. Because I know that no matter what, one day I will be unable to laugh..in this existence anyway.

It is my hope that you would join me by looking fear in the eye and telling it to go fuck itself. To laugh in it's face. This is what this Joker does.....

I quite understand your fear! My mother died at 59 so I welcomed my 60th birthday. My hubby was terrified until he reached his 40th birthday because his father died at 39. It will pass once you get past your birthday. x

I don't think either of those is irrational. And I'm sorry that this event has cast such a shadow over your years. But hey, I love ya!

truly sorry to hear what happened on the 60th birthday of your father. hope things work out. - maria