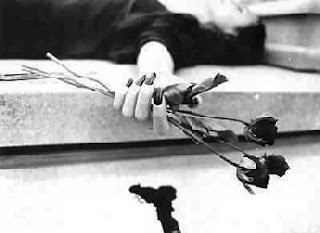 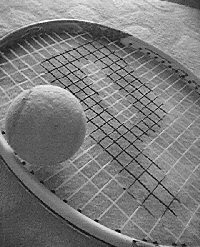 The second incident also involves Nickelback. Another person from this same board pretended to be a famous tennis player. I played along. It didn't harm me because I wasn't losing anything but time. I'd listen to her problems and follow along with her "tournaments." She even had her boyfriend, another famous tennis player, emailing me. Getting advice from me on their relationship. Hey! It was something to do and she wasn't hurting anyone as I believe that I was the only one she was bullshitting in the beginning. Then came a time when she got friendly through MySpace with one of Nickelback's crew members. She began promising him things. Meeting him, playing tennis, etc. She never came through. He questioned me and I felt at that point it was time to end the charade. I wasn't bothered by her delusions but he could have been hurt. After Amelia, I wouldn't want anyone hurt or even embarrassed by an Internet impostor. I sang like a canary! She was really, really pissed off at me.
Being a skeptic and cynic is my nature. It's not everyone's. I rarely get my feelings hurt but will always try to be aware of not hurting others. I think impostor's, liars, plagiarizers and the three sisters are detrimental to us good peeps. The Internet allows people to hide behind the mask of anonymity but they should at least be themselves, leaving us with at least some of our self-confidence and trust in our fellow humans intact.
Created by the warped mind of nitebyrd at 1:37 PM

It is wonderful, though, when we find the good people who feed our souls. Perhaps that's what we're all searching for?

Jackie, yes. I do think we are all looking for people that understand and encourage us. I've found many great friends via the 'net. I'm always disgusted but never surprised when someone is "taken" by another.

"I think impostor's, liars, plagiarizers and the three sisters are detrimental to us good peeps. The Internet allows people to hide behind the mask of anonymity but they should at least be themselves, leaving us with at least some of our self-confidence and trust in our fellow humans intact."

And jackie a. also said it well in her comment above.

Liars, deceivers and imposters are reprehensible. It is important to be able to trust - and equally imporant to choose slowly, wisely and carefully WHO you trust, having solid evidence over time that supports your feelings and willingness to be involved.

Be it in cyber space or be it face-to-face, truth MATTERS.

That's such a horrible thing to happen to Amelia, and that's exactly what LW is doing to guys, and that's why I helped expose her. She was trying to do the same thing with Middy. Luckily, he's had it happen before to him and wised up this time round, and didn't get hurt.

I really can't understand how people can do this to others. It's definitely making me more wary in cyberspace.

As a 'newbie' in this blogging and cyberspace world, I've been very aware of trying to keep my cyber identity anonymous, ( to protect the innocent!! ) whilst remaining true to myself - both the real 'me' and my 'Racy' alter ego.

What is on my blog is real and is all about me, me, me! Not that I'm an attention seeking exhibitionist at all! For me, my blog is another way of expressing my personality, thoughts, experiences etc. To pretend to be someone I wasn't would defeat the object for me.

It's wise to stay wary and expose the charlatans and as Jackie says, rejoyce in those those good people who are out there!

p.s. - thanks for all the lovely comments you've left on my blog! x

Hi! I'm Racy Redhead and have just left a comment on your blog. It won't let me leave the comment under my Racy Redhead details, so I've had to use the 'real' me - Lindsay, which is my Google account that I use for my personal stuff. I don't have a blogger account either.
Would you be able to change my name to Racy on the comment?
Also, if you're happy with this, would you like to add our details to each others blog rolls?
x

Nitebyrd....now you know why I keep myself so open. Except for my picture, which I keep to myself because of my job. It's one thing to have a pseudonym. It's totally another to use that same name for deceit and distraction. You, and everyone here (and when I begin blogging again) will always know who and what I am.

Note to Lindsay -- honey, do you have more than one e-mail address? That might be part of the problem...I'm not sure, but I have two e-mails and I always have them mixed up when I leave comments on posts.

Annie, Vi, Lindsay (Racy) and Ron. Thanks for your comments. I am very honest and keeping myself as open as possible. So far, I've been very lucky with my "cyber friends." I try to keep alert and aware but open to all until they prove to be a threat.

Racy, I've changed my settings so you should be able to post under your "wordpress" name.

I'm overjoyed at the support I'm getting and hope my writing won't disappoint!

Nitebyrd, I've not commented here before, but have seen you at Shon's place.

Unfortunately, I was duped last winter when I became "involved" with someone who, as it turned out, was engaged to someone else. I found this out when she (the someone else) called me in the middle of the night from HIS phone. Ugh...

Anyway, it's made me wary of anyone I "meet" on-line. Which is good, in some ways, but is sad in others. I never converse with anyone without immediately thinking they're lying and expecting from the beginning that it will go nowhere.

In other news: you have a great blog.

Thank you, Eve. I feel your pain and loss of trust as well. I have a little icon that says,"No one's a virgin, life screws us all." I think it's perfect for when our cyber virginity is snatched away by pricks.