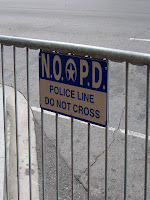 Last Thursday, you might have felt the earth shift slightly on its axis. Thursday was when approximately 1,600 women descended on New Orleans to participate in the Slumber Parties National Convention. We came by planes, trains and automobiles to learn more about our business and party in The Big Easy for four days. The estrogen in the air was palpable. Poor New Orleans! The town is still trying to recover from the effects of another loud, brassy, bold, wild woman – Katrina. And now it’s hit with Slumber Parties distributors from all over the world! Slumber Parties does not allow men to be distributors but some men were in attendance with their distributor wives, girlfriends and/or significant others. Those men may never be the same.

As you know, Delta Airlines lost my luggage. I had a brilliant costume for the Thursday night Welcome Party. The theme was “Las Vegas.” I was going as The Devil. Seriously, Vegas HAS to have The Devil somewhere, right? I mean, c’mon – you can smoke EVERYWHERE in Las Vegas. If that doesn’t tell you that Satan is there counting souls, what does? Anyway, I had a fabulous leather lace-up corset, a slinky long black skirt, red fishnet thigh-highs, red fuck-me-pumps with gold heels and red leather pierced devil horns, all packed and ready to stun my fellow convention goers. I damn near wept when 7:00 pm came ‘round and still no luggage. My amazing costume was not to be worn. ACK!!!! A friend whom I traveled with, whose luggage was also lost, decided we should drown our sorrows with free drinks at Harrah’s and gamble. So, we took off. We hit the 2 cent slots, drank girly strawberry daiquiris’ and pissed away 10 bucks on the one-arm bandits. A good time was had by all and my sadness at not being able to zip my tits up in soft leather for the night was almost gone by the 4th yummy daiquiri. (Mulder was sick this past weekend so once again I couldn’t get all gussied up for a picture to show y’all. We’ll attempt it again this coming weekend.) 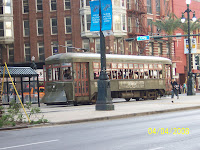 I’m not going to bore y’all with descriptions of my classes or the banquet. I will tell you we are introducing some awesome new vibrators and lingerie as well as many other hot products. I want to be able to make a living doing this because it’s so much fucking FUN!!!

So, my friend tells me she didn’t get to go all over Bourbon Street last year. Can you believe it??? Friday night after the banquet (two words – ELF FOOD!) we got ourselves out of formal wear into some comfy clothes and shoes to head off to the hottest little street in Louisiana. Our first stop was Tropical Isle to get a Hand Grenade. I don’t even want to know what’s in ‘em. They are delicious and powerful. Perfect! We hobbled down Bourbon Street taking in the sites and trying to avoid all the local cons. One is the “Let me shine your shoes.” This is where some random person gets all up in your space and sprays some shit on your shoes then wipes it with a dirty rag. They want $20.00 for this. (In their fucking dreams!) Don’t even give them a bill larger than a one because you ain’t gettin’ change. Another is the “free” hat scam. We managed to not encounter any of the usual tricks. We done good! Now, I couldn’t pass Pat O’Brien’s without introducing my friend to the famous Hurricane. So, I didn’t. Fortified with a Hand Grenade and Hurricane, we went in and out of shops, had card readings done and just had an all around fabulous time. I got my Prosperity and Healing candles is a cramped but fascinating shop. One of the owners gave me the name of an excellent Chinese massage book and tried to sell me the most exquisite handmade mask. If I had won more on the slots, I would have bought it in a NY minute.

I decided that my lone Hand Grenade needed a couple friends. If you keep your “souvenir” glass, they knock a buck off refills. What a fucking deal! Even though Mardi Gras had come and gone, tossing beads to people on the street is apparently a year round tradition. My friend and me yelled up to the bead throwers frequently. When they asked to see our tits, I politely told them that they really didn’t want to see antique tits so just throw the damn beads. They graciously tossed down enough beads to decorate our bodies with scads of glittery plastic. Not that I have anything against tit flashing but my girls are always harnessed. It’s not really easy to haul up the shirt and bra quickly so I just leave it to the young, perky and free.

Since I was staying in a room with three other women, picking up men wasn’t on my agenda. One of the ladies in my room did snag one. I was back in the room after 4 Hand Grenades and some exquisite barbeque to get ready for bed when in tumbles one of my roommates with a gentleman in tow! Imagine my surprise when I needed to get rid of some of the Hand Grenades and they had decided to see how sex in a bathroom would be!!! Holy Hell! It’s 3 o’clock in the morning, I have to pee like there’s no tomorrow and the only toilet in the room is rockin’ to beat the band. I quickly go down 9 floors to my friend’s room and use their potty. They were very nice about me waking them up and all.

Saturday morning, my friend and I decided to cut a class (Ooooo! So High School! LOL) and go to Mother’s for breakfast. Mother’s is just to fucking die for! I just love Mother’s. Of course, one breakfast will clog every artery in your body but it’s so worth it!

Other high-lights of the trip were:

A WWE movie being filmed on Canal Street. They must have crashed a car and trolley car about 5 times. Residents and tourists alike were not too happy about traffic, foot and vehicular, being stopped numerous times during the four days. I must tell you, watching a movie being filmed is about as interesting as watching paint dry. 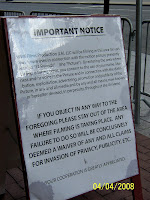 Sitting next to a church-going, Sunday go-to-meeting dressed, Bible carrying lady in Harrah’s as she won over $300 on the 2 cent slot machines. She had no idea what she was doing (neither did I for that matter) but she was praising Jesus, New Orleans, asking me questions, and sucking down free rum & cokes like The Rapture was the next day. I laughed so much my sides hurt the next day.

Giving a tipsy but tasty young man a light in the middle of the street and being told that he “just adored older women …” I gave that boy some beads and a kiss on the cheek.

Singing, at the top of our lungs, “Dead or Alive” with a very good live band at Bourbon Cowboy. Then trying to dance!
It was a good trip. Both business and personal wise. I would be remiss if I didn’t mention that Louisiana, Mississippi and Alabama costal regions are still suffering the lingering effects of Hurricane Katrina. It’s going on three years since this horrible natural disaster devastated the areas. We saw so many homeless – men, women and children, on the streets, in the parks and living in tents under I-10. Having lived through several hurricanes, none as severe as Katrina, but still not good; seeing this city torn apart and still not put back together after all this time is difficult. Just in case you feel inclined HERE is a link to various Hurricane Katrina charities.

My next Slumber Parties trip may be to Baton Rouge for more training in the fall. I’ll keep y’all posted.

May every one of you get your fill of Beignets and Café au Lait soon!

Created by the warped mind of nitebyrd at 8:00 PM

Sounds like a great time. I absolutely love New Orleans.

I've never been to New Orleans, but everyone I've ever known who has...say's it's GREAT!

And Mother's sounds like the kind of place I WOULD die for! I a love big fat artery cloggin' breakfast.

Damn....I wish I could have been there with you ladies, because you sound like the kind of people I would love to hang out with.

I laughed at what you said about Vegas having the Devil somewhere!!!!

So glad this trip was good both business and personal wise!

Thanks for for sharing, dear lady!

What a fab time!

Oh I am so spewing for you about the missing costume!!! It's got me so fired up that I need a damn cigarette!!! :-P *GiGGLeS* xx

You have emblazoned a grin across this crusty old face! I thoroughly enjoyed doing the "Bourbon Street memory trail" with your superb narration. (I am SO overdue for a return visit there ... LOVE the place!)

I am disappointed for all of the New Orleans folk with your loss of ensemble. Those poor people just can't catch a good break! (am anticipating those photos though!)

Welcome back to the hum and the drum. I am always Lovin' You!

Sounds like you really did have a wonderful and memorable time in New Orleans, Nitebyrd !

beignets are my favorite at breakfast :)

So did I get this right?

you had a terrible time and wished you hadn't gone!

Fantastic time then? Sounds like you all had a blast in New Orleans... shall add that to places I'd like to see before I die, which won't be for a very Long time yet!! I hope..

I want to go to Narleans just to try all the awesome food. Sounds like you had a kick ass time.

Wow! Sounds like you had a brill time, and left some of the place still standing when you left. Go girl!

Just came by again on Thursday morning to say hello and see how you were doing, Nitebyrd !

Sounds like great fun. Dont you just love young men with the perspicacity to see the charms of the more mature lady :)