My niece, who knows me very well, gave me a calendar last year called, “An Insult a Day.” It’s one of my favorite calendars, ever! Here’s a few of the best from January through today: 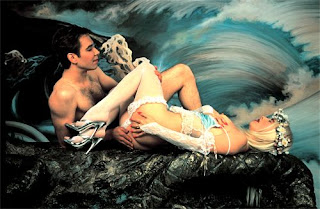 The last bit of methane left in the intestine of the dead cow that is post-modernism.
~ critic Robert Hughes on Jeff Koon’s “Jeff in the Position of Adam” *

Men are such idiots, and I married their king.
~ Peg Bundy (Married With Children) 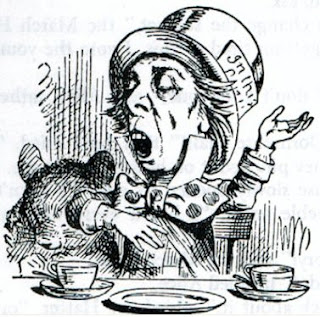 You’re enough to try the patience of an oyster!
~ Lewis Carroll

He’s got two brain cells: one is lost and the other is out looking for it.
~ anonymous

Hunched in its ravine, it is a hard-bitten, proletarian town, populated by immigrants … from beyond the Carpathian mountains. Bingo parlors abound, as do establishments dealing in prosthetics.
~ journalist Peter Conrad about Pittsburgh, Pennsylvania in The Observer Review of London

She was a professional athlete – of the tongue.
~ Aldous Huxley

He who joyfully marches to music in rand and file has already earned my contempt. He has been given a large brain by mistake since, for him, the spinal cord would fully suffice.
~ Albert Einstein

She truly has the soul of a moth and the brain of a dead trout.
~ Scott Sandler, friend of actor James Woods, on Wood’s ex-girlfriend

Converse with any plankton lately?
~ anonymous 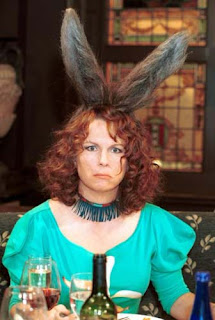 You look like a haggis with pointed toes. A tight old bladder skin holding together some rotting offal.
~ Saffron, to her mother after a Botox treatment on Absolutely Fabulous

Who among us has not gazed thoughtfully and patiently at a painting by Jackson Pollock and thought, “What a piece of crap”? *
~ critic Rob Long 1992 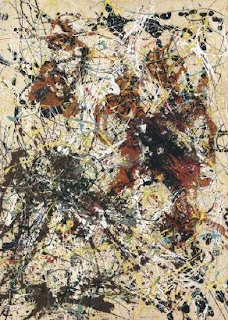 What she lacks in tact, she makes up for in being a complete moron.
~ political blogger John Amato

Do they ever shut up on your planet?
~ anonymous

* In "Dust Bunny" world, I'm an artist. In the real world, I'm a Nickelback fan so I really hate pompous needle-dick critics but a good insult is a good insult. That's the way I roll.
Created by the warped mind of nitebyrd at 8:54 AM

30 blew out from under the bed:

I just love those. I wish I could remember them just at the right time!

A good one I heard was

Ha...I love Absolutely Fabulous...and that was so funny.

Bunny...I love how you roll. And I just love you more knowing you are a Nickelback fan...Cause they fucking ROCK!

Ciao babes...sweets, you have an absolutely fabulous weekend. :D

Those are really funny!

Some great lines - love the Jackson Pollock one!!! Very funny!

Hah!! These are hilarous. Come on over to mine on Sunday, I'm going to post a vid that will make you giggle. xo

And some of those were VERY good insults :)

PMSL!!! I love the 'Men are idiots and I married their King' one! Too funny! xx

Every single one of these is friggin' BRILLIANT!

But the Joan Rivers one about California and New Jersey is my FAV!

And I LOVE the AB FAB photo!

They are brillient!!
I will have to look out for this calendar!

Oh you reminded me just how funny Peg Bundy was! I so MISS married with children!

Giggle is a tart over at my place!
Ya might wanna bring a bucket because you'll probably puke!!!

I love those. I wonder if I could get away with using those on middle school students.

I'm with you.. I LOVE a good insult.. if only my brain could contain more than how to change nappies, clean puke off polished floor boards without harsh chemicals or smell and every line to all the disney/pixar movies, I'd be able to recall some of these when the time is right!! lol

Flyinfox ~ Yeah, they made me laugh, too!

Akelamalu ~ Me, too! I always need time to get my brain in gear.

Spiky ~ Nickelback, ROCKS! Listen for a new song due out 09/30. AbFab is one of the greatest TV shows ever made.

Jackie ~ I knew you’d get a charge out of the Pollock one.

DJ ~ OMG! Although I was late watching the video, it was hysterical!

Annie ~ I loves me some good insults!

Giggle ~ That “King” one is excellent, isn’t it?

Ron ~ Joan definitely can be very funny at times. She’s no Dane Cook but then who is?

Casdok ~ Good to see you! Just check your local bookstore.

Trixie ~ I only watched it once. The husband reminded me of my brother-in-law and I don’t like him much.

Rat Girl ~ Please forgive me for being horrid and not visiting you recently. I’m so bad. 

Fire Byrd ~ I like that one, too! I used to have a sign in my kitchen that said, “I married Mr. Right. Mr. ALWAYS Right!

Garbonzo ~ Sure, why not? Oh! Wait … we must be kind and courteous to the little darlings now. Dammit!

Trublmaka ~ Oh! Girl!! You definitely need a grown-up night out!

buy zolpidem ambien side effects 2012 - what is zolpidem (ambien)