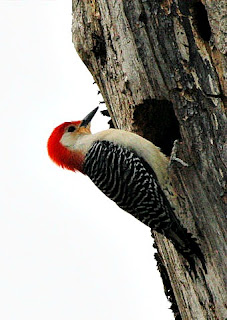 Created by the warped mind of nitebyrd at 1:16 PM

4 blew out from under the bed:

Nitebyrd, this was BRILLIANT!

I almost choked while smoking my CIGARETTE (Ha!) reading the dialogue between Charles and Arnold. HILARIOUS!

Come to think of it, I haven't seen a woodpecker since I lived in Florida?! I honestly don't think I've seen one since living back in the northeast?!?

So glad to hear that your new meds rock! You GO, Sis!

Glad to see you posted.

Have a super weekend!

I've never seen a woodpecker. We do have them over here but usually only in woodlands. :)

Ron and Akelamalu ~ Thanks for stopping by! These woodpeckers intrigued me. One day a squirrel did get up on the ledge not long after the first babies hatched. Mom and dad did double team attacks on him, finally chasing him back down the building!

Our most populous birds in this area are mockingbirds, starlings, cardinals, mourning doves and sparrows. A few blue jays, lots of hawks and surprisingly, eagles. I love watching the cardinals during mating season. Those females are very picky!

Ron, did you see the curly tail lizards when you were here? They're a relatively new development, slowly moving northward in the state.

This was hilarious! You women are brilliant!
what a riot!
~laughing~
( like a loon! another pecker!*WINK*)