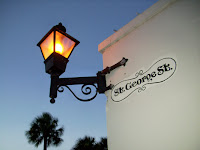 St. Augustine, is located on the Atlantic Ocean about 45 minutes south of .  It’s the oldest city in , settled by the Spanish in 1565.  The city was once enclosed by a huge stone-like (coquina) wall with a fort on one end.  The fort and the city gates remain today.  is located in . The building used to be the grand Ponce de Leon Hotel opened by Henry Flagler  in January 1888.  It’s a gorgeous building with Tiffany glass windows here and there.   There are numerous old houses and buildings in St. Augustine now housing shops, offices and restaurants for the delight of tourists (and residents) alike.  It’s a very fun place to visit.
So, enough with the history and on with the good stuff – The Ghost Tour!
I believe in ghosts, spirits, poltergeists, parallel time, reincarnation, all that stuff.  I LOVE it!  Now, I haven’t seen one damn “orb” or any ectoplasm on any of the ghost tours I’ve ever taken but hope springs eternal. 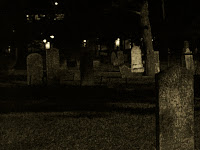 The Spanish tidily laid out the city of in a nice grid.  They didn’t use the same principal when burying their dead.  Graves seem to be scattered higgly-piggly in the cemeteries throughout the city and many bodies (or parts of them) never ended up in a cemetery at all!  If you were Catholic back in the day, when you died, you could be buried inside the walls of .  If not, you were assigned to be planted out in the wilds. is the oldest one within the city dating from the 1700’s.  There are several ghosts that haunt Tolomato, one is The Ghost Bride. She’s been seen wandering around in dressed in her wedding dress and veil.  She’s a young woman that died unexpectedly on the eve of her wedding; she was buried in her gown and is still looking that one man that was going to make her dreams come true. (Aren't we all?)
James, another restless spirit, is 5 years old.  His grave is set apart from all the other graves near a huge oak tree.  James has been seen playing on the ground and in the tree, mostly by young children. 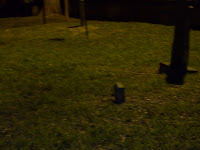 I don’t think the ghost of Father Verot stuck around the cemetery.  He was the first Bishop of St. Augustine.  When he died in 1867, the church wanted to make sure everyone who was coming from near and far to pay their respects got a chance to look at the Bishop before he was interred.  1867, folks.  No planes and was pretty much a backwater state then. A very hot, very humid, backwater state. The elders decided to seal the departed, unembalmed Bishop up in a metal coffin with a glass window since the sawdust and ice his regular coffin was setting in wasn’t holding up too well.  During the church service for the burial of Bishop Verot, his metal and glass coffin exploded spreading bits of the Bishop all over the congregation to say nothing of the stench that permeated the chapel.  Needless to say, the remaining bits and pieces of Bishop were hastily put in a mausoleum that was occupied by a previously deceased priest.  The bones of that priest were gathered up into a pillowcase and were set on top of Bishop Verot’s newly constructed coffin.  Both the Bishop and his tomb mate have since been moved to separate quarters. 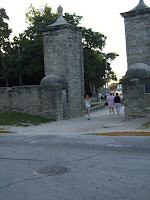 During the 1800’s the gates of the city were still operational and there was, of course, a gatekeeper.  The gatekeeper around the time of the 1821 yellow fever epidemic had a young daughter named .  She liked to come to the gates with her father and greet all the visitors to the city.  Because was on the front lines, she became one of the first victims of the epidemic.  Her ghost can be seen around the gates to this day, still greeting visitors to .  Again, children seem to see her most often.
Because not everyone in was Catholic, a “public” cemetery became necessary.  The (1821) was built right outside the gates of the city.  If your family had $4.00 when you died, you were allowed to be buried inside the wrought iron fence.   Judge John B. Stickney died in 1882 of yellow fever and was buried in the .  Several years passed and his family decided to have him exhumed and moved closer to where they were now living.  The gravediggers decided it would be okay to take some of the Judge’s gold teeth and jewelry as he really wasn’t using them anymore.  Apparently this didn’t set well with the Judge because he can be seen crawling around or walking around the cemetery looking at the ground.  I assume he’s looking for his stolen teeth or possibly pieces of the Bishop that might have landed near him. 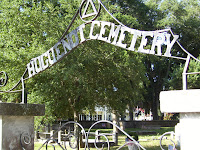 Another haunted spot is the country’s Oldest Drug Store.  When it was built, the builders digging the foundation came across a bunch of bones that they dug up and tossed in a mass grave across the street.  The apothecary got all set up for business but on the morning of the grand opening, the owners came in to find the place trashed.  They cleaned up and decided to try again the next day.  That morning, same thing – broken bottles, medicines scattered.  This went on for awhile before someone told them that the shop was built on an Indian burial ground and they had disrespected the spirits.  Not wanting to continue to spend money without making any, the owners dug up part of the floor and foundation, got the bones from across the street and reburied them.  After that, they had no problems.
Seeing that amputated body parts were tossed out the windows of the and buried where they landed, there are numerous Indian burial grounds and that people who weren’t Catholic or didn’t have the $4.00 to be buried within the public cemetery gates,  it’s no wonder that is one of the most haunted cities in .

I can’t wait to hear about the ghost squirrel looking for his nuts by the !
Created by the warped mind of nitebyrd at 12:01 AM

I swear this rigormortid (word? probably not!) squirrel is getting more time on your blog...what if I send you a pic of me laying there all rigid on the side of the road, will you post me and make me the butt of your jokes? That's probably the only way I'll get the fame I so desperately seek! Waaah!

pretty pics, haunting pics, that squirrel has become The Mascot!

You and I are definitely kin, because I too have this thing for graveyards, ghosts, spirits, reincarnation, etc. LOVE it!

Fascinating stories you shared here. Now I'm mad I never visited St. Augustine while I lived in Florida. One of these days if you ever come to Philly for a visit, I will take you to all the really cool old cemeteries throughout the city. Also, they have ghost tour you would LOVE.

I so enjoyed this!

I LOVE St. Augustine!! Great city with so much history. Great info you've got here and I cant wait to do the Ghost tour someday.

We've done the one in Savannah and one in Salem, Mass. Both really good!

They have a ghost tour down here in Ft. Lauderdale too. Maybe thats what we could do some day!!

Sandra ~ If you send me a picture of yourself laying on the side of the road, butt-naked like you’re posing for animal crackers, I’ll make it my headline picture and add it to every post I do from now on. Promise. ;)

Blacknick ~ I have to say, it’s probably my second favorite place in Florida. Captiva Island being the first. St. Augustine is unique, funky, beautiful, odd and just plain fun!

Akelamalu ~ Ghost tours are always informative and fun. Last time I went on the one in St. Augustine, they took us to the fort. It was windy that night. At the height of the story, a big gust of wind came and blew a huge palm frond off at tree. We all jumped so high we almost fell off the wall! The “South” has some great haunted places.

Sir Thomas ~ I love scary shit! Savannah, GA is one place I’d like to visit. Nothing beats New Orleans for scary, haunted cemeteries, though.

TEL ~ Thanks! Maybe I should have a naming contest for him. Whatca think?

Ron ~ I’m sure Philly has some creepy old buildings and cemeteries that I would LOVE to see! If you come down here for a visit, make sure to go to St. Augustine – even for just the day. You won’t be disappointed.

peedee ~ I’ve been on a couple in St. Augustine, but they are always fun and I learn something. My favorite was in New Orleans with Nassau running third behind SA. Never went to one when I lived down south, that would be fun!

nitebyrd ~ I have a ghost in my house, oh and a dirty mother fuckin fairy who when my back is turned, un straightens the house... Oh no I forgot... that's the two kids(adults) we own... Free to a crazi home.